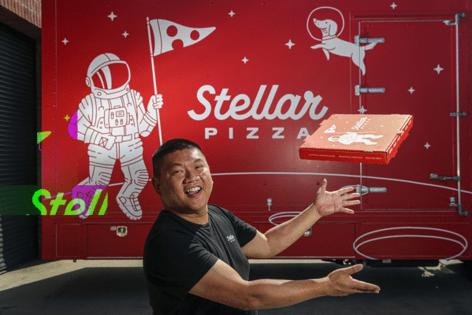 In an office park in Hawthorne, California, a robot built by rocket scientists is making pizza.

Inside the machine, a box roughly the size of a cargo van, a metal claw plucks a ball of premade dough out of its refrigerated chamber. A press then smashes the dough into a 12-inch disc. On a conveyor belt, a nozzle spits out sauce, dispensers shake cheese and toppings on top, then a robotic lift carries the raw pie to one of four 900-degree deck ovens. Cameras and sensors track the progress from step to step, making tiny adjustments along the way. In 45 seconds, a finished pizza pops out.

It tastes pretty good. It costs just $7 to order (or as much as $10, depending on toppings). And with slim labor costs and a chef that never eats, sleeps, or takes a break, the team behind Stellar Pizza think they can take a bite out of the country's $45-billion pizza market — or at least the part of the pie that's dominated by high-volume, low-cost chains.

Benson Tsai started the company in 2019, after leaving a job designing batteries for spacecraft and satellites at SpaceX, the Elon Musk-helmed rocket company around the corner from Stellar's headquarters.

He convinced a couple dozen fellow engineers to join him, raised $9 million in funding and spent the last three years honing the Stellar recipe and building its pizza machine.

Now they're raising a second round of funding to build out a fleet of finished robots, each of which can fit in the back of a bright red 16-foot box truck to travel to stadiums, college campuses and other customer-dense locations. Orders will be taken via a smartphone app; the few humans involved will be there to drive the truck, assemble the boxes and distribute pies.

Stellar is not alone in the food robot field. A number of restaurant automation companies have been building labor-saving devices in recent years: delivery robots that trundle across sidewalks, waitstaff robots that roomba between tables with dishes on their heads, and robot arms that can operate fryolators are all finding a toehold in the industry.

But pizza has attracted more mechanized attention than most other foods.

"Pizza is a massive opportunity, and so a lot of players are getting into the space," said Chris Albrecht, an industry expert who writes the food automation newsletter OttOmate. "The universal appeal of pizza is what makes it the tip of the spear for startups looking to get into food automation."

Because humans — and especially Americans — eat a lot of pizza. The global pizza market is estimated at about $130 billion in sales, according to Pizza Magazine's 2022 Pizza Power Report, and more than a third of that business is in the U.S., where Americans spent about $45 billion on pizza in 2021.

BRENTWOOD, Missouri — The Clockmaster here is running out of time.

After more than three decades solving the puzzles of century-old clocks and five-figure watches, Robert Good is ready to retire, and there's no one ...Read More

U.S. Steel Corp.'s Gary Works in Indiana will be the site of a study exploring the capture of carbon dioxide emissions from the air and storing them in concrete as a way to help reduce air pollution and battle the climate ...Read More