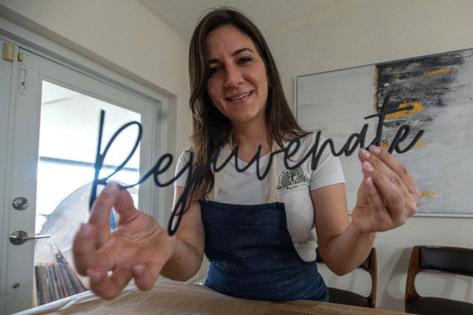 MIAMI -- At age 10, when she arrived in the United States from Cuba after waiting four years to be reunited with her father, Jennifer Arniella didn’t dare to speak English. She was afraid that her middle school classmates would make fun of her, so she kept to herself and her small circle of friends from Homestead.

Arniella, who did not speak English well until she was 18, has had the opportunity to meet President Joe Biden to tell him — in the language that once gave her headaches — the difficulties she faced and the perseverance she displayed to start a business during the pandemic.

“It was something very intimate, very nice, not at all intimidating,” says Arniella, recounting the meeting that five small-business owners had with Biden in the Oval Office on April 28.

“The president asked us about the problems we had with our business in this pandemic, and he also talked about his experiences as a young man. I was impressed by his simplicity,” Arniella said.

Back at home in Southwest Miami, painted woodwork, letter stencils and a laser printer fill a room. Several signs rest on a kitchen island. One says “Rejuvenate,” and another one is about donating food to people in need. They are the signs that she embosses.

“Find something you love so much that you can do it without stopping, that when those 10 hours a day are over, you want to continue, although obviously you can’t because you have other obligations,” Amiella advises for entrepreneurs.

The mother of two little girls began her business career when one of her daughters was only two months old.

It’s not hard to see why her business, Unique Crafts by Jenn, made her a successful entrepreneur and an ambassador for Miami’s small-business owners, when she was chosen by the Small Business Development Center Network of Florida International University to go to the White House.

“I focus on making signs for small businesses, which I really like because I learn from the different businesses that people are creating all over the United States. We ship to California, New York, Tennessee,” she says about the services provided by Unique Crafts by Jenn, which in just over a year has grown so much that Arniella’s house became too small for her and now she needs a warehouse.

Arniella graduated in mechanical engineering in 2014, worked for five years and got a master’s degree from FIU. d to use as a guide on the path to leadership in the industry. When the pandemic hit in 2020, she was two months pregnant. After she finished her master’s studies, she started looking for a job. But then came layoffs.

“After having my baby, I could have gone back to engineering and earned a good salary, but I like challenges,” she says.

In high school, she scored high on exams and also received a college scholarship. And with her business, Arniella has not stopped learning.

She saw the success of a friend who opened a successful Etsy shop. She was excited at the idea and opened her own store. The first signs she sold were for baby rooms. She made them on a simple printer. She realized that if she had already received 10 orders, the business had a future.

“The most important thing is perseverance; you can’t miss that,” she says about a key requirement for entrepreneurship. “You may lack the skills, but those are learned. On Google, on YouTube there is all kind of information, but you can’t give up.”

Arniella was about to give up several times, especially with the painting of the signs, which she could not master until one of the mothers on a Facebook group gave her guidelines to improve. “If you fail, it’s only to continue learning. It happens to me, and it will continue to happen to me, but they are all opportunities to learn,” she says.

STIMULUS MONEY FOR HER BUSINESS

With the help of stimulus checks and the child tax credit sent during the pandemic, Arniella bought a professional laser printer, which cuts and engraves signs and logos on acrylic, plastic, leather, wood and glass. “It was an extra money that we didn’t expect.”

She is also grateful for the help she receives from her husband, a civil engineer who came from Cuba at age 21. He not only managed to graduate from FIU but is planning to start a business himself.

“It’s very good to have someone who supports you when you are starting a business. It gives you a great peace of mind,” Arniella says.

The beginning wasn’t easy. She had to go to Home Depot every day to buy wood. Today, she has a wood supplier that makes home deliveries. She also has a part-time employee who helps her cut and paint the wood.

Arniella also benefited from free counseling offered to small businesses in South Florida by experts from the FIU SBDC, who recommended her to go to the White House to meet the president.

Within a few months of starting her business, Arniella wanted more clients, and she asked for help with marketing, one of the services offered by the SBDC program.

“They don’t do your job, you have to do your own research, but they guide you,” said Arniella, who frequently chatted online with a counselor at the center and received videos that told her, for example, how to make a website for her business.

“I did it through Shopify. It was very fast, it took me about half a week, but it doesn’t require programming knowledge,” she says.

In addition to preparation, Arniella said the secret to her success is good customer service.

“The first thing is to provide excellent customer service from the moment they write to you. I have my phone in my pocket, and when I receive a message from a client, I answer immediately. You will rarely see that in a company, so people prefer to do business with you and they stop looking for other offers. Ninety percent of these people buy from me.”

When she thinks about how she would like her business to be in five years, Arniella imagines herself in a larger warehouse. In fact, she asks for help from someone who can rent her a medium-sized one. She has big dreams.

“I would like to make signs for businesses to place outdoors, those that go in shopping malls, made with more resistant materials.”

It was 1986, and the incoming freshman, a self-described TV addict, assumed the course would teach Latino teens ...Read More