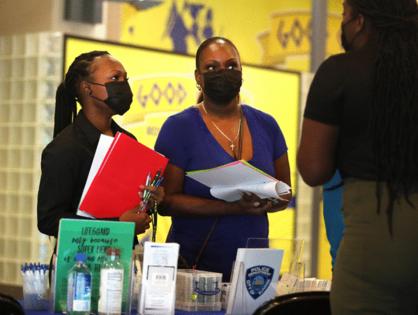 The bestselling 2016 book “Hidden Figures,” later adapted into a popular film, told the story of Black female mathematicians who played an essential role in the U.S. space program in the 1950s and 1960s, but who faced racial discrimination and were paid less than their male counterparts.

The gender pay gap existed before the era portrayed in the book and film, and it persists today, though it has narrowed in recent years. In 2019, the national median salary for women working full time was $43,394, compared with $53,544 for men, according to the U.S. Census Bureau’s American Community Survey.

The sponsor of a West Virginia bill that aimed to close that gap there named it for two of the mathematicians featured in the book and film, Katherine Johnson and Dorothy Vaughan, both of whom were born in the state. The bill, which has been introduced for several sessions but has failed to pass, would require employers to publish salaries when advertising jobs and would prohibit companies from retaliating against workers who discuss their pay with colleagues.

Studies show that salary transparency—coupled with laws prohibiting companies from asking an applicant about their current or previous pay—can narrow the gender pay gap. If companies must advertise salaries for open positions, and current employees can freely discuss pay, applicants are less likely to receive or accept lowball offers. Studies show that women and minority candidates are most likely to receive such offers.

But research also shows that salary transparency tends to lower men’s salaries even as it raises those of women—and might lower salaries overall. Multistate companies have found ways to circumvent the laws by refusing to accept applications from job seekers who live in states that require transparency. And critics say salary transparency laws might persuade companies to hire fewer employees, and could foment conflict in the workplace.

State Rep. Barbara Evans Fleischauer, the Democratic sponsor of the West Virginia bill, said it has foundered against opposition from Republicans and business interests. “One member said: ‘I don’t want my secretary talking to others about what they make,’” she recalled.

There are no readily available studies on whether state transparency laws have helped close the pay gap, since the first of the laws took effect just a few years ago, in 2018.

But a 2019 study of Canadian universities, which have similar requirements, found the laws “reduced the gender pay gap between men and women by approximately 20-40 percent.”

“It’s very hard to lowball some new potential employee if the new potential employee is capable of looking at a range of salaries,” said Cornell economics assistant professor Thomas Jungbauer. “This can have a positive effect on wage gaps because of gender or color. Employers might offer lower wages to certain types of applicants. This makes it harder.”