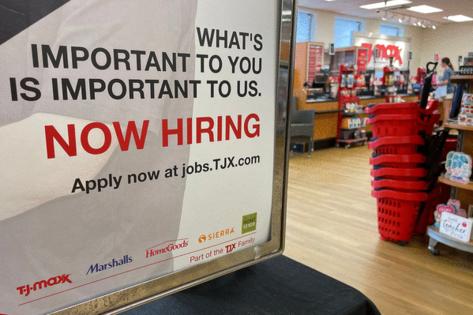 The monthly jobs report is the Rodney Dangerfield of economic statistics. It gets little respect yet has a big and important audience.

In good times, employment data is derided as “a lagging indicator,” as if just because it captures what the job market was, it is to be dismissed, especially by the stock market. In bad times, the job information either confirms the difficult times or is rejected as out of date.

May’s jobs report is likely to be discounted even if it shows Americans continue finding work and US companies continue creating new positions. The stock market is in a foul mood. It is convinced the Federal Reserve’s fight against inflation will not just slow down the economy but trigger a recession.

“A recession in 2022 is not my base case,” Federal Reserve Bank of Atlanta President Raphael Bostic told me last week. “There's a lot of momentum in the economy today.” And he pointed to the job market as evidence.

In the past year, over a half-million jobs have been created each month. This is three times the average monthly rate in the year before COVID-19. By the same time after the end of the Great Recession, the job market was limping along. It was averaging only 160,000 new jobs per month.

“By any standard, that is in an incredibly powerful and strong economy moving forward,” Bostic said.

The May report will be released Friday in the week ahead. Even a slowdown in hiring would still represent a booming job market.

It hasn’t regained all the jobs lost in the early weeks of the pandemic. That is likely to come sometime this summer. And an uptick in the unemployment rate may be a sign of relieving pressure on the tight labor market conditions instead of a warning sign of a looming recession.

The jobs data will reinforce the Federal Reserve’s efforts to bring down inflation by raising its target short-term interest rate. And that strategy is respectful as long as the job market continues growing.