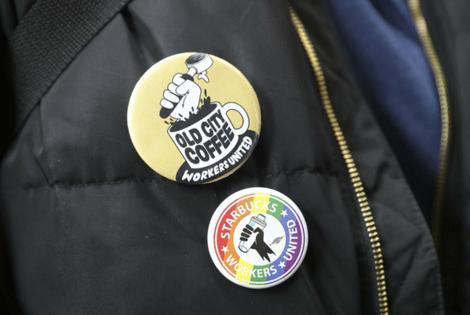 Employees at four Philadelphia Starbucks voted this week to unionize — with workers at two stores voting unanimously — joining a wave of newly organized Starbucks across the country.

Five Philly shops in total voted on unionizing on Wednesday. Employees at 1945 Callowhill St., near the Barnes Museum, voted against unionizing, 10-4.

Close to 270 Starbucks outposts have filed petitions to the National Labor Relations Board to unionize, and more are in the works. Of the 110 union-organizing elections that have been held, workers have voted to unionize at 95 locations, according to Workers United communications director Dawn Ang. Nine stores have voted against unionizing, and the results of six elections are pending challenges.

Starbucks, which has nearly 17,000 stores in the United States, did not immediately reply to a request for comment.

Shauna Reichman Lemieux, a barista who works at the 3400 Civic Center Blvd. location, tuned in for the virtual vote count on Wednesday. She was 99% sure ahead of the tally that her store would vote to unionize. She said feelings among her co-workers had solidified as the vote grew closer, despite small-group and one-on-one meetings that managers held with workers to discuss unionizing — and despite warnings by interim Starbucks CEO Howard Schultz that only non-unionized Starbucks would receive enhanced benefits in the coming months.

In a previous interview, Reichman Lemieux said unions give workers “a legal and official bargaining chip,” something she thought that service-industry workers especially need. She has secondhand familiarity with unions: Her mother was in the painters union and her stepfather is a member of the electrical workers union in South Jersey.

On Wednesday, her younger sister and mother were messaging her for updates. “As soon as it was determined that we won, I texted both of them and they were both so excited.”

In the contract bargaining to follow, Reichman Lemieux hopes to see increased staffing, higher pay, and more predictable hours at her store.

“I feel a little more hopeful going into the future,” she said.