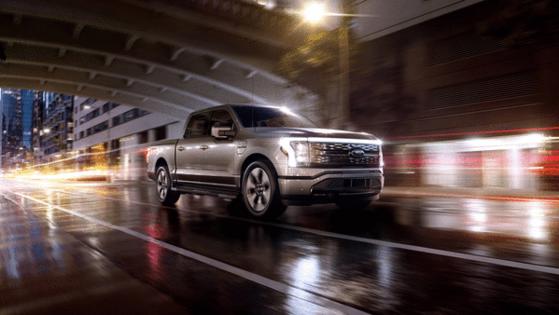 The Silicon Valley startup had changed the electric game with its $40,000, 220-mile range electric sedan. Delivered less than two years since it was first introduced by CEO Elon Musk in April 2016 to an unprecedented 200,000-plus pre-orders, the Model 3 headlined a clean-energy portfolio that included home-battery energy storage and solar roof tiles.

Ford realized that it needed to change its own game to compete.

“Our competitor is Tesla,” Ford Vice President for global EVs Darren Palmer in an interview in San Antonio at the Lighting’s media test. “We see our brand to be an electric-vehicles and an electric-energy company.”

The Lightning is the result of a comprehensive process to re-imagine the pickup as a utility vehicle and a mobile generator in a fraught energy landscape.

“We worked like a startup because we were competing against startups,” said Palmer. “You could see EVs were really coming of age. We didn’t know what customers wanted, so the first thing we did was go out and see customers in California, Norway, China, Europe. Customers really opened our eyes to what we needed (and how) to make use of the new technology to do new things that customers had never seen before.”

New things like a front truck – “frunk” – that can hold two golf bags for a day on the Texas links. Or offer three days of generating power for the home during a California blackout.

The Lightning debuts at a time when one of its key markets, California, is facing energy shortages this summer as the state shuts down baseload generation in its transition to green energy sources. “Officials forecast a potential shortfall of 1,700-5,000 megawatts,” reported Reuters during the Lightning’s media rollout. “Supply gaps along those lines could leave between 1 million and 4 million people without power.”

Ford product experts used the opportunity to tout Lightning’s unique abilities to operate as an electric generator for about the same $10,000 price as a permanent, natural-gas generator.