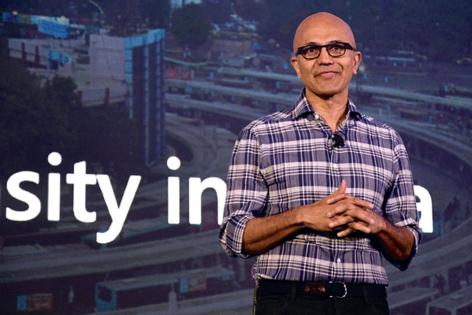 Microsoft will review its policies on sexual harassment and gender discrimination, and release the findings of investigations into allegations against senior leaders, including Bill Gates, the company pledged Thursday.

Microsoft will hire an outside law firm to conduct a review assessing the company's practices, benchmark those policies against "best practices" adopted by other companies, and look at the steps Microsoft has taken to hold employees and executives accountable, the board of directors announced.

The review will culminate in a public report — expected this spring — that will include data on the number of sexual harassment cases investigated, as well as their resolutions.

"Our culture remains our number one priority and the entire Board appreciates the critical importance of a safe and inclusive environment for all Microsoft employees," Chairman and CEO Satya Nadella said in a prepared statement.

"We're committed not just to reviewing the report but learning from the assessment so we can continue to improve the experiences of our employees."

The report follows a shareholder directive passed last year. The resolution called for a report on the effectiveness of the company's workplace sexual-harassment policies in light of claims of sexual harassment, including allegations that Gates sought inappropriate relationships with employees.

Microsoft said it received a complaint in 2019, while Gates was on the board, that he attempted to start a romantic relationship with an employee in 2000. The board investigated but said last year the process wasn't concluded because Gates stepped down as a director.

In 2019, several allegations of sexual harassment at the company also surfaced in an email thread among employees. The report coming this spring will include a review of concerns raised in that thread, the steps Microsoft has taken to respond and additional steps that could strengthen safeguards.

Long before that thread, employees at Microsoft began pushing the company to address workforce-diversity issues: Blacks at Microsoft was founded in 1989, and Women at Microsoft followed a year later.

In 2016, after the company released data that it had nearly eliminated the gender pay gap among employees, women pushed back, reporting their experiences ran contrary to the upbeat tone of the message and claiming Microsoft was trying to whitewash a gender-discrimination problem.