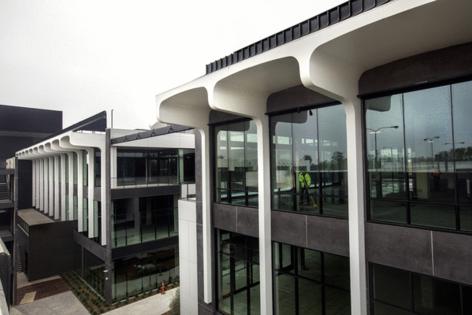 Bosses are recommitting to their company offices even as Omicron is extending the remote working trend that has kept many of their workers laboring at home since COVID-19 erupted in early 2020.

In a sign that leaders still put a priority on togetherness, office leasing in Los Angeles County finished the year in positive territory after falling during most of the pandemic.

The shift suggests that executives are bullish on the future of their businesses and have decided that offices are important to have even if their employees keep working remotely some of the time in the years ahead.

"People like the hybrid model" of splitting their labors between the office and home, CBRE real estate broker Todd Doney said, "but the thought that offices are dead is far from reality. Offices will be an important component for companies going forward."

You wouldn't know that from walking into a typical office building these days.

The number of people working in them has been low since the start of the pandemic and then dropped substantially when the Omicron variant surged. Average office population in the country's largest metro areas fell from nearly 40% in mid-December to 28% the week of Jan. 5, according to Kastle Systems, which provides key-card entry systems used by many companies and tracks patterns of workers' card swipes.

In the Los Angeles area, the average office population was 26.5% as the year began. Omicron has been a drag on occupancy, said John Barganski of Brookfield, downtown L.A.'s largest office landlord.

Population in Brookfield's buildings, which include some of the city's most prominent skyscrapers, stabilized at over 20% in 2021. Barganski had anticipated that number would start to climb early this year, but in the face of Omicron, tenants are again pushing forward their return dates to later in the first quarter.

"They're definitely planning on being back," he said, "perhaps a little slower" than they had hoped a few months ago.

How many workers will be expected in the office on a given day has yet to be determined by many companies as they strive to manage shifting desires from employees, many of whom have taken a liking to working on their own.

Early in the pandemic, the general public was discouraged from buying N95 masks over fear there wouldn’t be enough for health care workers. That’s no longer the case.

CHICAGO — It’s another tough winter for restaurants. And in Chicago, depending who you ask, the city’s COVID-19 vaccine mandate is either hurting or helping.

In highly vaccinated neighborhoods, and in restaurants ...Read More