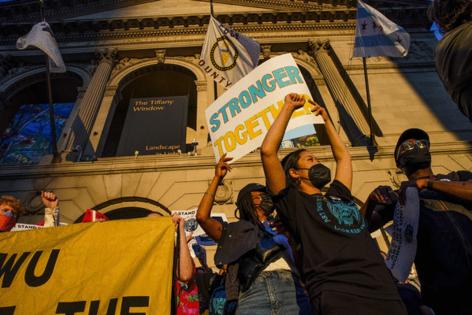 One day after the Art Institute of Chicago Workers United was certified to represent workers at the iconic South Michigan Avenue museum, employees at the School of the Art Institute won the vote to join their brethren in the nascent labor union.

The first major museum union in Chicago will represent 249 employees at the associated school, including academic advisers, administrative assistants, mailroom workers and other employees under a separate bargaining agreement.

The results were tabulated Wednesday by the National Labor Relations Board’s regional office in Chicago. The final vote achieved the needed majority with 115 in favor of unionizing and 48 opposed. School management challenged the eligibility of 44 ballots, and those were not counted, while about 40 eligible employees did not vote, the union said.

“I voted yes because in nine years of working at SAIC my largest raise was 49 cents. We deserve equity, respect and a living wage,” Rachel Perlman, a school receptionist, said in a news release.

The union will be part of American Federation of State, County and Municipal Employees, which represents 10,000 workers at 91 museums nationwide and more than 25,000 library workers at 275 public and private libraries, including the Chicago Public Library.

“The School intends to enter into good faith bargaining with AFSCME to negotiate an initial collective bargaining agreement that best meets the needs of all parties to the contract while allowing us to continue to deliver on our mission of providing a world-class art and design education,” school spokeswoman Bree Witt said in an emailed statement Wednesday.

The employees are seeking higher wages and better working conditions, which were exacerbated by layoffs and furloughs during the pandemic. The Art Institute laid off 76 people between April and June 2020, and furloughed 109 employees last year between January and April.