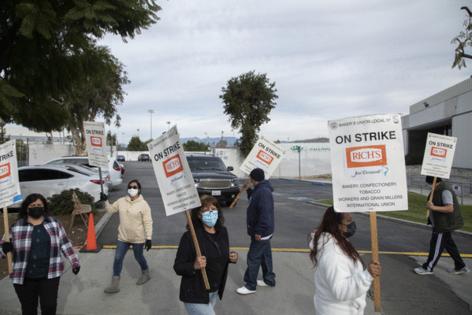 Cristina Lujan, 46, has worked on the line at the Jon Donaire Desserts plant in Santa Fe Springs for 19 years, nearly half her life, making and decorating cakes for food chains such as Ralphs, Walmart and Baskin-Robbins.

Since Nov. 3, however, she has been walking a picket line outside the plant, protesting a contract offer from Donaire's parent, Rich Products, that comes to a raise of $1.60 an hour over three years — 50 cents an hour in the first year and 55 cents in each of the next two.

She and her fellow 165 unionized employees worked through the pandemic, except for two weeks when the company shut down, though they were required to use vacation time or sick days to keep money coming in.

The workers, mostly Latinas, received "hero pay" — a roughly $2 hourly addition to their standard wage of about $17 an hour — for a six-week period that ended in June.

Working conditions that haven't even been on the table in contract talks include management's habit of saddling workers with mandatory overtime assignments within minutes of the end of their shifts, making it nearly impossible for them to schedule medical appointments or arrange child care.

The main topic of contract talks is wages. "We feel we're getting underpaid," Lujan told me simply. The workers have asked for raises of $3 an hour over the life of the contract.

Just before Christmas, the company offered a $4.10 hourly increase over three years but would substitute the existing union-sponsored health plan with one workers considered inferior. The employees overwhelmingly voted it down.

No further talks are scheduled, according to the union and Buffalo-based Rich Products.

The strike has begun to get political support.

The five Los Angeles County supervisors recently wrote Rich in support of the strikers, prompting the company to respond with a letter stating it was "highly disappointed" at the outcome of the last vote.

For Boeing Co., the pandemic was just one item on the long list of its existential concerns over the past four years. But after a talent exodus, the twin tragedies of its 737 Max jets falling from the sky, and stiff ...Read More