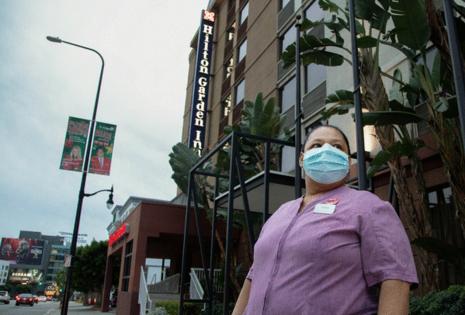 Cristina Velasquez has cleaned up almost every imaginable mess during her 21 years as a hotel housekeeper, but the scene awaiting her when she opened the door to a room at the Hilton Garden Inn in Hollywood a few months ago still haunts her.

As she stepped in, she was hit with what smelled like dead animals and the sight of blood on the bedsheets. Lots of blood. Also, maggots and hypodermic needles. Velasquez reported it to her manager, who merely told her to clean it up as fast as possible. She was on a tight schedule. There was no time to investigate.

“It was gross,” Velasquez said in Spanish. “I lost my appetite that day.”

The pandemic has added stress to most jobs, but the work of hotel housekeepers — already an occupation with high injury rates — has become increasingly difficult, with fewer workers facing short deadlines to clean rooms that are more cluttered and filthy than ever.

To reduce the risk of spreading the coronavirus, many of the nation’s largest hotel chains have adopted policies that make daily housekeeping optional, letting guests choose how often housekeepers enter the rooms. In most cases, that means housekeepers enter only after guests check out, leaving multiple days’ worth of trash, grime and discarded towels to deal with.

Although demand for hotel rooms has returned to pre-pandemic levels in Southern California and other parts of the country, hotels have not replenished the housekeeping staff to the levels of 2019.

In Southern California, about 70% of the housekeepers have been rehired since hotels were shut down and thousands of workers were furloughed at the onset of the pandemic, according to Unite Here, Local 11, a union that represents hospitality workers in Southern California and Arizona.

The messes housekeepers are reporting include mounds of fast-food wrappers, piles of dirty towels, containers of half-eaten takeout food, floors sticky with spilled drinks and, occasionally, feces smeared on bathroom walls. One housekeeper shared a photo with The Times of a bed covered in hundreds of nitrous oxide capsules, manufactured for whip cream dispensers but often used by people who inhale the gas to get a quick dizzying high.

Before the pandemic, housekeepers entered rooms on a daily basis, making it quicker and easier to clean and disinfect each day’s accumulation of clutter and grime, said Kurt Petersen, co-president of the union that represents more than 32,000 hospitality and airport workers. Under the new policies, fewer housekeepers are now required to perform roughly the same number of daily cleanings on the same short deadlines as before the pandemic, but increased messiness makes those jobs more labor-intensive, he said.

“The pandemic has been an unmitigated, nonstop health and safety disaster for housekeepers,” Petersen said. “Cleaning a room that has been left untouched for days is not only more difficult and time-consuming, but it is far less safe for guests and workers.”