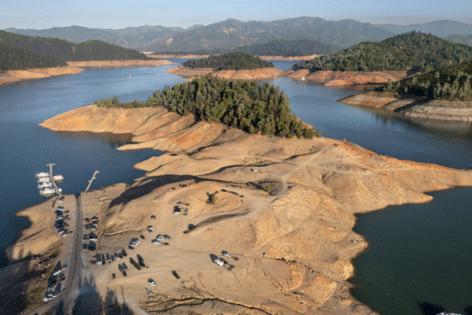 In California, water is for scamming. The newest example is a majestically cynical ploy being foisted on taxpayers by some of the state's premier water hogs, in the guise of a proposed ballot measure titled the "Water Infrastructure Funding Act of 2022" — or, as its promoters call it, the More Water Now initiative.

The measure's backers need to gather nearly 1 million signatures to place the measure on the November 2022 ballot. That process has just begun, and its outcome is uncertain.

But the initiative is so costly and dishonest that it's wise to nip it in the bud now.

The measure could wreak permanent damage to the state budget and force taxpayers to pay for ecologically destructive and grossly uneconomical dams, reservoirs and desalination plants.

It would also undermine the authority of state judges and environmental regulators, and gift growers and dairy ranchers with millions of acre-feet of effectively free water. (An acre-foot is about 326,000 gallons, or enough to serve one or two average households for a full year.)

The initiative's proponents say it's needed to provide "clean, safe drinking water for homes and businesses, water for agricultural use, and treatment, purification, and reclamation of stormwater and wastewater, while maintaining protection for the environment."

In reality, "it's really a bait-and-switch," says Doug Obegi, the California water expert at the Natural Resources Defense Council.

"It significantly undermines environmental protections for fish and wildlife," Obegi told me, "and raids the state's general fund to subsidize new water projects that would predominantly benefit industrial agriculture in the Central Valley."