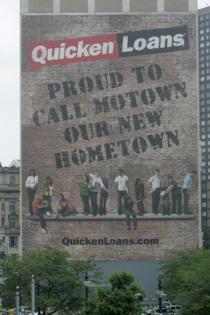 Gilbert's real estate firm Bedrock bought the 40-story building on Cadillac Square for an undisclosed purchase price, although Crain's Detroit Business, which first reported the deal, said a source familiar with the matter said it for about $36 million.

The purchase of the mostly empty office building, located at 65 Cadillac Square, marks a return of Gilbert's strategy of buying up buildings in downtown Detroit. In the early part of the last decade, Gilbert, a co-founder of Quicken Loans, purchased several buildings located in the city's downtown core and renovated them.

By the latter half of the last decade, though, Gilbert said the city was running out of high-quality office space, and needed new construction to attract businesses. Soon after, he announced the Hudson site project, which was originally designed to be taller than the RenCen but has been downsized to 49 stories.

The previous owner, businessman Zaid Elia, purchased Cadillac Tower three years ago for $24 million, Crain's Detroit Business reported, but then put it up for sale just a few months later.

A Bedrock spokesperson didn't respond to a request for comment. A voicemail message and email seeking comment with the Elia Group weren't immediately returned.

The Cadillac Tower, which opened in 1927, was designed by the firm Bonnah & Chaffee in the Late Gothic Revival style, with terra cotta and golden accents, and has been in continuous use ever since, according to HistoricDetroit.org. John Barlum, who owned a real estate company and made his money initially from his father's meat-packing business, funded the construction, HistoricDetroit.org said. The building is also known as the Barlum Tower.

In its largest purchase ever, Microsoft will pay $95 a share in cash for one of the U....Read More