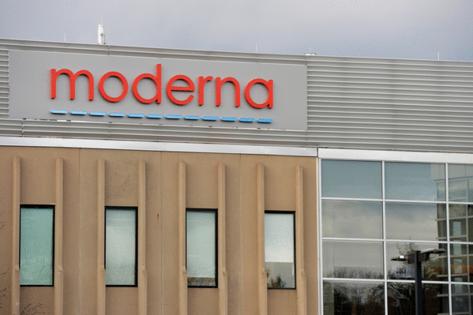 While much of the world was sent into a panic by the sudden emergence of the Omicron variant of the COVID virus, Moderna Inc. weathered the shock pretty well.

Indeed, its shares have gained more than 25% in value since the World Health Organization labeled the microbe a "variant of concern" and gave it a greek-letter designation on Friday.

That includes a 12% gain on Monday, the first full trading day since Thanksgiving, and a retrenchment of about 7% during Tuesday's trading.

The obvious reason for the gain is that as a manufacturer of one of the two leading COVID-19 vaccines, Moderna stands to make a tidy profit from the resurgent crisis.

The firm recorded about $10.7 billion in revenue and more than $7.3 billion in profit from its vaccine in the first nine months of this year, and expects $17 billion to $22 billion in sales from the product next year.

Moderna's chief executive, Stéphane Bancel, said Monday that he expected that existing vaccines won't work as well against the new variant as they have against the old but that Moderna is already preparing anti-Omicron booster formulas.

Moderna's fortunes are closely tied to the COVID-19 vaccine, its only commercial product.

(Pfizer, the maker of a similar, competing vaccine, has a broad product line and is nearly six times as large as Moderna as measured by revenue and recorded more than twice Moderna's profits, or $18.6 billion, in the nine months ended Sept. 30; its shares have risen by only about 6% since the WHO announcement.)

But all is not bright for Moderna. Thanks in part to the astounding success of its vaccine, the company is also locked in a fierce battle with the U.S. government over credit for developing the vaccine.

That comes as the appearance of Omicron has intensified calls for an international waiver of intellectual property rights to the vaccines for the duration of the pandemic emergency.