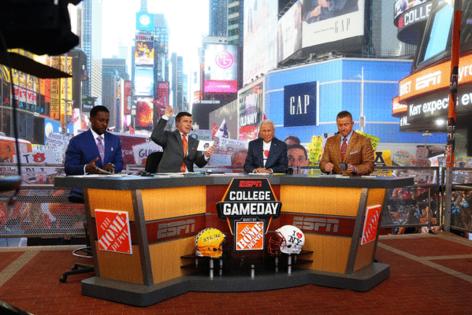 As part of the deal, Comcast agreed to begin distributing ESPN's Atlantic Coast Conference Network to its Xfinity subscribers.

The agreement also extends an arrangement in which Comcast offers its customers easy access to streaming services Disney+ and ESPN+.

"We're very happy to extend our longstanding relationship with Comcast and continue to provide their Xfinity customers with Disney's best-in-class programming," Sean Breen, a Disney executive vice president for distribution, said in a statement.

The deal came without a threat of a dreaded TV blackout in December, when sports fans are keen to watch football on the ESPN channels. Financial terms of the deal were not disclosed.

The renewal continues a détente in a historically contentious relationship between the two TV giants.

In 2004, Comcast tried to swallow Disney — and Disney mobilized to reject the hostile takeover attempt. More than a decade later, the two sides battled again. In December 2017, after Disney's former chief executive Bob Iger struck a deal with Rupert Murdoch to buy much of the elder mogul's Fox entertainment empire for $52.4 billion, Comcast Chief Executive Brian Roberts jumped into the fray and tried to wrestle away the prize — infuriating Iger, according to people familiar with the situation.

Comcast succeeded in plucking one property, the European satellite television operation Sky. But Disney had to pay significantly more than it had intended — $71.3 billion — to win the auction for the Fox assets.

The two companies separately have agreed to coexist as co-owners of the streaming service Hulu — at least for a few more years.

As part of the Fox deal, Disney claimed the controlling stake in Hulu, and Comcast wants to eventually unwind its ownership stake to focus on its nascent Peacock streaming service. In 2019, the two companies reached a truce in which Comcast will remain a partner in Hulu until 2024.

Disney considers Hulu the third prong in its direct-to-consumer bundling strategy with ESPN+ and Disney+.