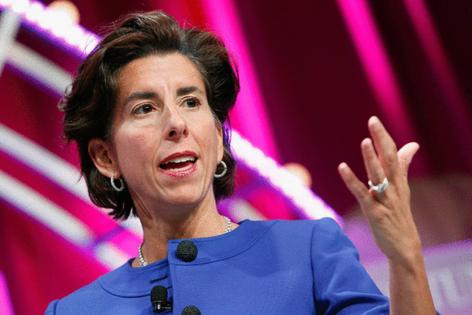 "Here's the reality: We can't wait, because the rest of the world isn't waiting," she said. "China, Taiwan, the EU, other countries all around the world, they are not waiting. They are incentivizing and subsidizing the production of chips right now and have been for a long time."

The visit by Raimondo, a former governor of Rhode Island and a one-time venture capitalist, comes as the global chip shortage enters its second year, with manufacturing industry executives warning they expect supplies to continue to be constrained in the near term — perhaps even into 2023.

The shortage has been especially challenging for global automakers, hampering production worldwide, leaving dealership lots bare, pushing up prices and limiting choices for consumers. It's also prompted thousands of autoworker layoffs and furloughs. The shortage could cost the industry an estimated $210 billion in revenue globally this year, according to AlixPartners LLP, a global consultancy tracking the shortage.

Raimondo pushed hard for the U.S. Innovation and Competition Act, a bill aimed at increasing U.S. competition with China that would put $52 billion toward domestic chip production. The Senate passed the bill, including a provision spearheaded by Sen. Gary Peters, D-Bloomfield Township, that would set aside $2 billion for the legacy chips used primarily by the auto industry. Backers of the bill said Monday they hope to see it signed into law before year's end should it be passed by the House.

The bill would create a fund at the Commerce Department to incentivize companies, via grants or loans, to build semiconductor manufacturing facilities in the United States. Some of the funding also could be used for workforce training. Proponents said the bill could help support the establishment of at least six new fabrication facilities across the country.

"We need the folks in Washington, we need the House, to pass the CHIPS Act (funding) immediately so we can get to the business of doing this because the stakes are just that high," Raimondo told the Economic Club meeting at MotorCity Casino Hotel.

The shortage began about a year ago, when the coronavirus pandemic prompted automakers to cancel orders with suppliers even as competing sectors locked in contracts as demand for consumer electronics skyrocketed.

Demand for autos came roaring back sooner than predicted, leaving the semiconductor industry scrambling to catch up even as it's been hampered by natural disasters, plant fires and ongoing COVID-19 outbreaks.

U.S. automakers and their sprawling supply bases, meanwhile, are largely dependent on foreign chip suppliers. Currently, about 75% of the world's semiconductor manufacturing capacity is in Asia, with the majority concentrated in Taiwan.