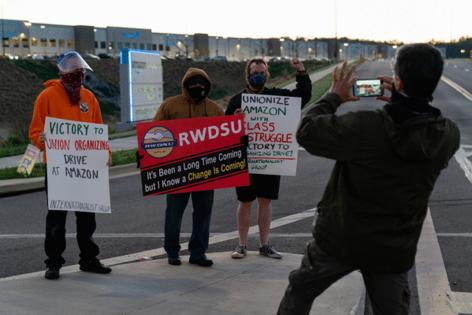 The National Labor Relations Board ordered a new union election at an Amazon facility in Alabama after reviewing allegations that the e-commerce giant had engaged in illegal conduct during the high-profile campaign, which the union lost.

NLRB spokesperson Kayla Blado said Monday that a regional director of the labor board ordered a new election. Representatives of the Retail, Wholesale and Department Store Union, which led the failed unionization drive in Bessemer in April, said the date and method of the new election are yet to be determined.

The ruling for a redo of the election comes after a big boost, and then a big fail, in the spring for Amazon workers, and activists supporting the effort to organize against one of the nation's most powerful employers.

The drive represented the furthest Amazon workers anywhere in the U.S. had gone in the process of formalizing a union, and it was energized by unusually strong attention and support across the country, fueled partly by the extra scrutiny the pandemic put on risks faced by warehouse and other workers.

Amazon spokesperson Kelly Nantel said the company discourages unions and is disappointed with the NLRB decision.

"Our employees have always had the choice of whether or not to join a union, and they overwhelmingly chose not to join the RWDSU earlier this year. It's disappointing that the NLRB has now decided that those votes shouldn't count," Nantel said in a statement. "As a company, we don't think unions are the best answer for our employees."

The statement said Amazon is focused on "continuous improvement" of worker pay and safety that is hard to do quickly when unions are involved.

Stuart Appelbaum, president of the union, applauded the decision. "Today's decision confirms what we were saying all along — that Amazon's intimidation and interference prevented workers from having a fair say in whether they wanted a union in their workplace — and as the regional director has indicated, that is both unacceptable and illegal," Appelbaum said in a statement.

Shortly after the vote tally in April, RWDSU challenged the outcome, alleging the results were influenced by illegal intimidation and unfair practices by Amazon during the campaign.