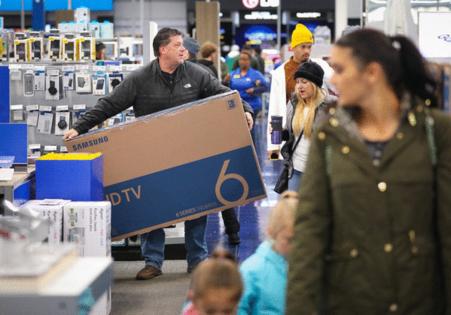 LOS ANGELES — Ashton Caudillo headed out with his father early Friday morning to the Westfield Santa Anita in Arcadia looking for a hard-to-find PlayStation 5 well before the mall’s 7 a.m. opening. What they found surprised them: only a handful of other shoppers.

The 20-year-old’s father, Lawrence, has a distinct memory of Black Fridays past, when hordes of people made the experience less than pleasant, so he wasn’t complaining.

“Black Friday used to be like Disneyland, waiting in line 45 minutes to spend money. I’d rather shoot myself in the foot than do that. So this, this is nice,” the elder Caudillo said with a smile. “I love when there’s not a lot of people around.”

In the most consumptive nation on Earth, Black Friday in the U.S. has long been viewed as the ultimate looking glass, reflecting all that is good, bad and so-so about the world’s largest economy.

This year the message seems to be: Black Friday is not what it used to be. A historic shift to online sales, the lingering pandemic and uncertainty around a long-brewing supply chain crisis is changing how Americans shop.

Around Los Angeles County, foot traffic at malls and stores that have long readied for the consumer assault of Black Friday appeared relatively slow for the biggest shopping day of the year.

There were fewer than 15 people in line at Baldwin Hills Crenshaw Plaza an hour before its 10 a.m. opening, with entire rows of the two-story parking lot still empty when doors swung wide. Crowds were also smaller than usual early Friday morning outside the JCPenney at the Glendale Galleria, a major Black Friday destination, and at Burbank’s Empire Center outdoor mall.

“We’re honestly pretty stunned to see such a minimal turnout. We definitely expected a lot more people to be here that early,” said Elin Markarian, 18, who joined two friends to wait outside the Burbank mall’s Best Buy for four hours before it opened.

They ended up second in a line of fewer than 100 people, barely enough to wrap around the corner of the store.

In Arcadia, business picked up at the Westfield after opening hours, but it wasn’t the door-busting experience mall workers expected. That was a welcome surprise for Hot Topic sales associate Michele Uribe, who said the day felt “like a regular mall day.”