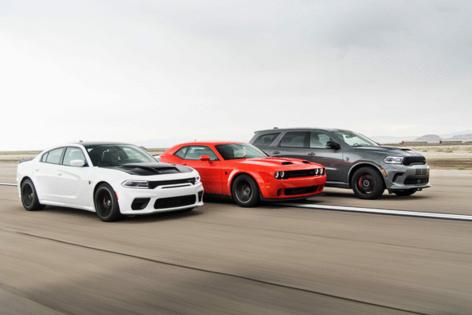 Dodge is ending production of its iconic, V-8-powered Hellcat Challenger and Charger muscle cars models by 2023 as the brand transitions to a mix of electrified EV, hybrid, and plug-in drivetrains in the face of government regulations forcing battery-powered vehicles. The high horsepower, supercharged hemi engines have defined the brand for the last six years, driving an increase in sales as Dodge stuffed Hellcat V-8s into everything from its muscle cars to the three-row Durango SUV.

The Charger and Challenger models, however, will remain in the lineup as the Hellcats pass into history. The news amps up the pressure on Dodge's first so-called eMuscle electric car, due early next year in prototype, to deliver on its promise of a new era of Tesla-like, electric performance.

Reaction to Dodge's announcement ending the sizzling, supercharged V-8s from the enthusiast community was met with a mix of rage, disbelief, and resignation.

"Hellcat production is sadly going to end in 2023," moaned enthusiast publication Car and Driver of the Hellcat engines that delivered between 707 and 840 horsepower. "You have two years left to buy a Hellcat. We won't let the Hellcat's rambunctious whine of its supercharger be forgotten by the whispering whir of electric motors."

Wrote Hellcat_Red on the SRT Hellcat Forum: "Seems like we are close to say good bye at the most legendary American muscle car. Really sad the future that is coming."

"Not happy with this forced EV situation. Guess I need to order a Redeye before it's too late," added "S8ER01Z" in reference to the 797-horsepower V-8 Challenger model..

The Hellcat lineup — paired with ringleader Kuniskis's over-the-top marketing instincts — has driven a brand sensation. Despite being built on two-decade-old platforms, the sinister looking Challenger and Charger vaulted over Camaro in Detroit's muscle car race and is challenging Mustang for #1. They are best-sellers in the coveted California market. Dodge web traffic has been epic despite its relatively low sales volume — across three models — compared to megabrands like Chevrolet and Ford.