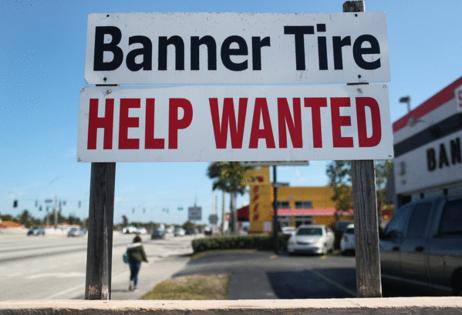 The American job market is a laggard, but it is catching up faster than it may first appear.

The U.S. economy is bigger than it was before the COVID-19 pandemic began. The stock market is higher. But there were 3.6 million fewer jobs in October compared to the end of 2019.

Closing that gap is a key factor for the Federal Reserve for how and when it pivots its focus to price hikes. Inflation is testing the central bank’s patience with American companies and workers.

The latest evidence comes Friday in the week ahead with the release of the November jobs report. Investors and economists expect that it was another big month of hiring, with hundreds of thousands of people returning to the job market. Forecasts predict about a half-million new jobs. That would bring the two-month running total to close to 1 million — the best two-month rebound since before the COVID-19 delta strain began circulating over the summer. That slowed the job growth, providing another reminder of how linked the job market is to the germ.

Yet maybe not so much. The Bureau of Labor Statistics keeps revising data for two months after the headline statistics are released. Between June and September, 626,000 more jobs were added than initially included in the monthly releases. This was first reported by the Washington Post and confirmed by government data. The August revision alone, which added almost a quarter of a million more jobs than first reported, is the largest on record.

The Fed’s dual mandate — full employment and steady prices — is proving again to be a delicate balance. As strong inflation threatens to anchor itself well beyond energy and food prices and the job market’s strength looks more sustainable on second and third looks, pressure will build for the bank to speed up its response by rising interest rates.