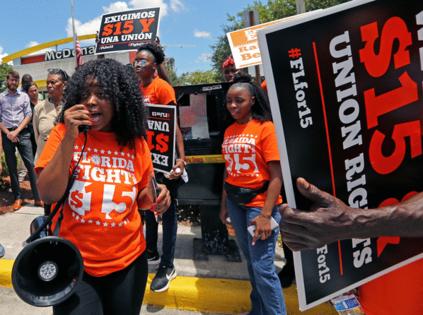 A year since Floridians approved Amendment 2 to gradually raise the state’s minimum wage to $15, a Republican lawmaker is again looking for a way to pay workers less.

State Sen. Jeff Brandes of Pinellas County refiled a joint resolution that would authorize the Legislature to establish a subminimum wage potentially as low as $4.25 an hour that employers could pay to new hires during their first six months.

First, lawmakers would need to pass the resolution to place it on the 2022 ballot; then, it would need 60% approval from voters.

“The goal is to get an employer to offer a job to an employee they otherwise would not consider because of experience or other risks factors that make them a riskier hire,” Brandes said. “The goal here is to get people trained and then moved up to the minimum wage and beyond.”

But worker advocates argue it’s merely a way to undermine Amendment 2, which after receiving 60% of the vote will annually raise the minimum wage by $1 until it hits $15 in 2026. The minimum wage in Florida now is $10 an hour.

“This is just a loophole,” said Tsedeye Gebreselassie, director of work quality for the National Employment Law Project. “The scope of this proposal would allow a training wage for, it sounds like, any job where you have a new employee. From my reading of it, there’s no detail on what are the jobs, what are the industries where you might need a training wage; what are the skills you are asking workers to learn before they’re paid a higher wage. It’s so clearly a proposal to circumvent what Florida voters overwhelmingly voted on in 2020.”

One study by the Florida Policy Institute, a left-leaning Orlando think tank, estimated that Amendment 2 would lift 1.3 million households out of poverty, including some families earning less than $21,720. It found that as many as 2.5 million part-time and full-time workers would see their pay increase, mostly women and people of color working tourism and service jobs.

Before Amendment 2 passed, Florida’s minimum wage had gone up by just $2.50 since 2005 and that was only because of an amendment approved by voters in 2004 that raised it by $1 and tied it to inflation.

But business groups and Republican lawmakers argue that raising wages would come at the price of hurting employers, pointing to studies by the Congressional Budget Office and Florida TaxWatch, a nonprofit run by a board of directors that includes lobbyists for Walmart and Universal Orlando, that said the amendment would force businesses to raise prices and eliminate jobs for inexperienced employees.

Brandes said his resolution’s purpose was to help those workers.

“I believe there are going to be many winners as the state minimum wage rises, but there’s also going to be people who are disadvantaged,” he told the Orlando Sentinel in February. “Is it better to be unemployed with a $15 minimum wage or employed at a $10 minimum wage?”

The resolution Brandes filed during the last legislative session would have paved the way for the Legislature to create a subminimum wage specifically for residents who had served prison time, those under 21 and other undefined “hard-to-hire” workers. It didn’t include details on how long employees could be kept at the training wage or what the wage would be.

The proposal drew support from the Florida Chamber of Commerce, whose donors include Walt Disney World, Publix and Darden Restaurants, but ultimately died without a hearing. Since then, Brandes has refined the resolution’s language, eliminating the parts that mentioned ex-felons, teenagers and “hard-to-hire” workers.

Now it states that the lower wage “would be based on a federal temporary training wage rate, if any, or on the findings of a study commissioned every three years by the State Legislature to determine a sufficient minimum training wage rate.”

That clause would allow Florida to set a subminimum wage as low as $4.25 an hour, the same as the federal youth minimum wage. But the U.S. Department of Labor authorizes employers to pay that rate only to workers under the age of 20 and only for their first 90 days on the job.

Brandes’ resolution already has support from at least one of the influential business groups that opposed Amendment 2, the Florida Restaurant and Lodging Association.

“It provides some incentive to hire someone with less experience,” said Samantha Padgett, an attorney for FRLA. ”I wouldn’t call it a loophole.”

The Florida Chamber of Commerce did not return emails asking for comment but supported the resolution last session, arguing that ex-felons and teenagers would be “highly and adversely impacted” by Amendment 2.

Tim Nungesser, legislative director for the National Federation of Independent Business in Florida, hasn’t taken a position yet but said “the resolution does highlight the growing mismatch in the economy where employers cannot find qualified workers to fill available jobs.”

Workers advocates, however, are still steadfastly against the measure.

David Cooper, a senior analyst for the Economic Policy Institute, said he worries the resolution would be exploited to allow businesses to pay a lower training wage to any new hires, no matter how experienced they are. He said although about half of states have some type of training wage, most are tailored to teenagers and designed to last only for their first 90 days of employment.

He said allowing a six-month period could prompt employers to churn through employees to keep paying them a lower rate.

Brandes and Padgett said they think it’s unlikely employers would exploit the training wage as a way to bring on cheap labor.

Burdensome, sometimes budget-busting, overdraft fees are gradually getting chipped away as criticism builds against banks.

PHILADELPHA — Malvern-based Vanguard will modify a popular medical benefit for retirees and employees, instead of cutting it entirely as announced in October, according to a letter from the mutual fund company.

SAN JOSE, Calif. — Coronavirus omicron uncertainties have prompted prognosticators with the UCLA Anderson Forecast to scale back their predictions for employment gains and total jobs in California during 2022, economists...Read More

YPSILANTI, Michigan — Electricians are booked and busy with customers waiting months to get standby electric generators installed on their properties as manufacturers face parts shortages and installation companies are ...Read More