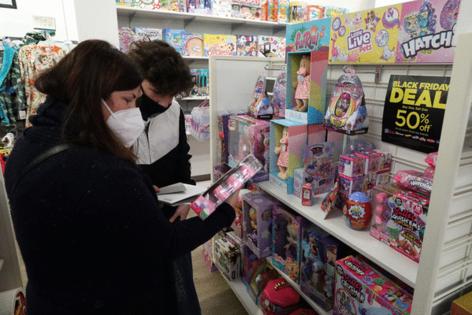 Black Friday may not bring hordes of predawn deal hunters to stores the way it used to, but there’s still plenty of shopping expected to happen Thanksgiving weekend.

The National Retail Federation is forecasting record holiday sales of $843.4 billion or more during November and December, up 8.5% compared with last year. But earlier-than-usual deals and concerns about supply chain issues leaving popular items out of stock have pushed consumers to start shopping earlier, and fewer people are expected to shop on Thanksgiving weekend than before the pandemic, the retail trade group said last week.

However, as consumers have grown more comfortable returning to bricks-and-mortar stores, a larger share is expected to head to the mall rather than shop from a laptop on the couch at home. About 64% of consumers surveyed by the retail trade group said they planned to shop in stores on Black Friday, up from 51% last year.

Here’s what to expect.

Last year, several malls and stores that usually let shoppers kick off their shopping on Thanksgiving closed as the pandemic raised concerns about crowds. Target announced Monday that change will be permanent. Other retailers closing their doors on the holiday include Walmart, Kohl’s and Bed Bath and Beyond.

That said, many major retailers don’t make shoppers wait until Thanksgiving to shop at least some of their “Black Friday” deals, and early signs suggest shoppers have been getting a head start. Consumers spent $72.4 billion online in October, up 8% compared with the same month last year, according to Adobe, whose Adobe Digital Economy Index tracks online spending during the holiday season.

Supply chain issues mean an early start — ideally even before Black Friday — is especially important when it comes to specific, must-have gifts that need to arrive on time, said Taylor Schreiner, director, Adobe Digital Insights. Waiting for deals is safer if a shopper knows they want a TV, but isn’t committed to a certain model, Schreiner said.