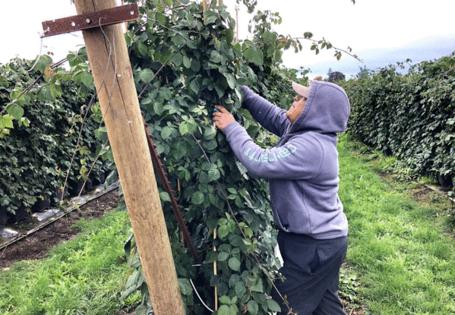 BORING, Oregon — For 24 years, Jaime Villegas left his mobile home in California's Central Valley every summer to follow a path paved by generations of California farmworkers.

He would get into a car packed with duffel bags of clothes and coolers with food and embark on a 14-hour journey through acres of agriculture fields, past giant sequoias and unmarked dirt roads to their final destination: Oregon's blueberry harvest in a town called Boring.

He was a boy when he first started doing this trip with his parents, and in later years he went with his wife, Enedina Ventura, and their children. But the ritual was almost always the same. Friends would run into each other on the way up north. The fathers drove the cars; mothers helped in the fields while children attended school until they were old enough to help with la cosecha.

"It felt nice," Villegas, 38, said on a recent October evening. "The good thing is family supports you."

But that ritual has been upended. Fewer and fewer Californians are now showing up for the blueberry harvest. Experts and farmers say economics and a lack of affordable housing are largely to blame.

But it's not the only reason. A place Villegas and Ventura and so many other farmworkers considered relatively pleasant to pick is no longer the same.

Summers in the Pacific Northwest are getting hotter and drier. Oregon's temperatures have skyrocketed to triple digits in recent years. Several blazes, including the Bootleg fire, raged throughout the Beaver State.

Edward Taylor, distinguished professor at University of California Davis' Agriculture and Resource Economics department, said to his knowledge there isn't a study that statistically links harvest migration to extreme heat in the Pacific Northwest. But he found it interesting and worth studying because whatever makes migration less attractive makes people migrate less.

Taylor conducted research in Mexico that showed extreme heat "significantly" drove migration out of rural communities and into other parts of Mexico and the United States.

"I can imagine in this context that anything would make farm work less pleasant than it already is," said Taylor, who also serves as director of the Center on Rural Economies of the Americas and Pacific Rim at UC Davis. "It would simply compound this big picture we see happening out there. Fewer farmworkers. Less and less are willing to migrate to follow the crop."

Boeing said Wednesday that the cost of the prolonged halt to deliveries of its 787 Dreamliner widebody jet has soared to $5.5 billion.