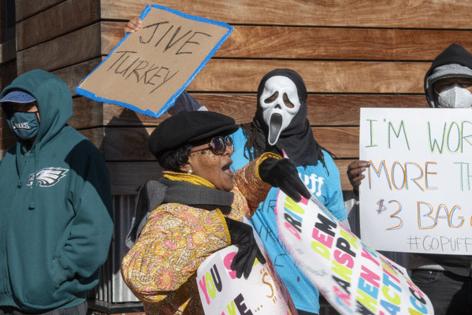 Waving signs and reciting a poem, about 25 Gopuff drivers rallied outside the company’s Philadelphia headquarters Tuesday to demand better pay and working conditions.

Drivers gathered the same day that hundreds of others from across the country were expected to strike for a day. They held signs reading “Gopuff yourself” and “We’re worth more than a $3 bag of snacks.” They chanted, “No drivers, no Gopuff.”

This summer, Gopuff slashed minimum hourly pay rates that it guarantees scheduled drivers, called subsidies, and recently reduced some bonuses for delivering higher numbers of orders. Drivers, who are mostly independent contractors, are paid through a combination of commissions, tips, subsidies, and other incentives. Gopuff has previously said it adjusts compensation based on supply and demand.

“Some of us have to work 12- to 15-hour days just to make what we were making back in 2019, 2020,” said Candace Hinson, a driver from the company’s Manyaunk facility. “It’s absolutely ridiculous.”

Gopuff has said it is listening to drivers and working to improve conditions. Drivers earn $18 to $25 an hour on average, “which is among the highest in the industry,” a company spokesperson said Friday.

More than 400 drivers from “dozens” of facilities committed to strike Tuesday, according to Working Washington, a Seattle-based pro-worker group that has organized drivers. The group claimed the labor action disrupted the company’s promise of fast deliveries in some markets, but Gopuff said its delivery times were normal for a Tuesday.

Fueled by billions of dollars from investors, the company has rapidly grown across the globe with about 500 fulfillment centers and stores in the U.S. and Europe. Gopuff has about 8,000 employees in offices and warehouses, but has declined to disclose how many independent contractors it uses to deliver orders.

Among other things, drivers want Gopuff to increase their “subsidy” — the guaranteed hourly rate that drivers earn if there are few orders during a scheduled shift — to $20 an hour plus the cost of mileage. They’re asking for a guaranteed minimum number of hours, too. In addition, the gig workers want more transparency about causes for termination.

A Gopuff spokesperson said Friday that nearly 70% of delivery partners choose to deliver less than 20 hours a week. Referring to the company’s warehouses, she added: “For anyone looking for a guaranteed salary and schedule, Gopuff provides full and part-time employment with benefits in every market we operate.”

Gopuff has said the vast majority of its workers earn more than the minimum guaranteed rates that it cut this year in facilities across the country. But Philadelphia drivers said the company’s changes have resulted in less overall pay. In Manayunk, for example, Gopuff cut the hourly earnings floor from $12 to $7.75 in September, according to company emails.

Ronald Moody, a warehouse driver, led the group in reciting a poem about how drivers feel about the company.

“You call us your partners, but you set all the rules and terms,” he said. “Then you change them at will, without regard for what we earn.”

With Southern California a global hub for cargo in this e-commerce age, train cars filled with valuable goods are crisscrossing hundreds of miles of track at all hours.

But amid the supply chain congestion at local ports ...Read More