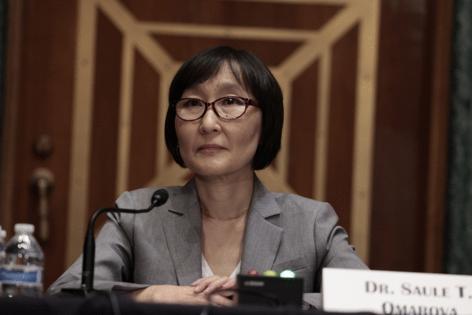 Amid all the crass stupidities and rank hypocrisy directed at Saule T. Omarova, President Biden's nominee as comptroller of the currency, one remark stands apart.

"I don't mean any disrespect," Sen. John N. Kennedy, R-La., told Omarova at her Senate Banking Committee confirmation hearing on Nov. 18 in his folksiest head-shaking manner. "I don't know whether to call you 'professor' or 'comrade.' "

Senate observers have long been accustomed to the Oxford-educated Kennedy's Gomer Pyle act; if he choose to play to the rubes gallery, all we can say is bless his heart.

In this case, however, he has used his schtick to advance one of the uglier attacks on a nominee in recent memory.

Its theme is that Omarova, who is currently a law professor at Cornell but was born and raised in the former Soviet Union, is some sort of secret communist bent on overturning the American way of banking.

Omarova's upbringing has emerged as a principal concern for Republicans like Kennedy, and a small handful of congressional Democrats, because they're fronting for the banking industry.

The banks want no one like Omarova in place as comptroller. There are two reasons. (Leave aside that Omarova would be the first woman or person of color to lead the agency.)

One is that she's likely to shake up the agency, a banking regulator that has been so thoroughly captured by the industry that it serves as little more than a bankers' fifth column embedded in the executive branch.

The other is that having studied American banking for the better part of three decades, she knows more about the industry than most bankers.

Industry campaigns to derail the appointment of anyone seen as a potentially tough and knowledgeable regulator aren't uncommon. Witness the campaign waged by Amazon and Facebook against the appointment of Lina Khan as chair of the Federal Trade Commission, which was almost as personal as the war on Omarova, albeit rather less absurd.

The state laid out more than $2 billion in incentives that it will provide to Intel, which announced a ...Read More

Employees at four Starbucks locations in Michigan are joining the movement to unionize workers at the country's biggest coffee chain.

A Florida jury handed down a $110 million verdict against 3M in the latest trial over the company's allegedly defective earplugs — a sum twice the size as all other related earplug verdicts combined.

The case was the ...Read More

There's one aspect of California's program to spur the installation of rooftop solar panels that everyone can agree on: It has been spectacularly successful.

Launched in 1995 and pushed forward a decade later, when then-...Read More

The Federal Reserve’s focus has shifted away from the job market. Investor attention should remain, however, when the January jobs report is released on Friday in the week ahead.