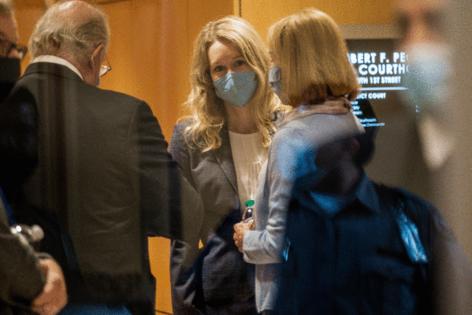 SAN JOSE — The prosecution rested its case against Theranos founder Elizabeth Holmes Friday after 10 weeks of trial, which included testimony from high-profile investors including former U.S. Secretary of Defense James Mattis and representative for the family of former U.S. Education Secretary Betsy DeVos.

Prior to calling Holmes to the stand, a lawyer from her team asked the judge to acquit Holmes on the basis of insufficient evidence against her. Holmes is charged with felony fraud in connection with her failed Palo Alto blood testing startup.

Holmes, in her initial testimony Friday, spoke directly to the central allegation in the case: that she intended to defraud patients and investors, claiming her technology could conduct a full range of blood tests on small samples when she knew it had serious accuracy problems. Asked by one of her lawyers, ‘Did you believe that Theranos had developed technology that was capable of performing any blood test?” Holmes responded, ‘I did.’

Also at issue in the trial are claims by Holmes that Theranos could perform any test available in a typical large lab, and jurors have seen a company menu offering 200. Holmes told the jury that her company could perform 70 types of blood tests for patients and only 12 on its own machines, but that when she talked publicly about the testing she wasn’t limiting her comments to those dozen tests.

Prosecutors over the 10 weeks called only a fraction of the people on its witness list to testify. Key evidence the jury has seen against Holmes included that she distributed to investors and others reports lauding Theranos and bearing apparently stolen logos from pharmaceutical giants Pfizer and Schering-Plough. Jurors also heard that Holmes told investors her technology was being used on med-evac helicopters, despite testimony from a former Theranos employee that he was not aware that her blood-testing machines were used clinically on soldiers in war zones or military aircraft. Mattis, who served on Theranos board and invested $85,000 in the firm, testified that he wasn’t aware that Theranos’ technology was ever deployed by the Pentagon.

Also on Friday, the judge dismissed one of the fraud counts against Holmes because the patient it related to did not receive one of the blood tests the prosecution listed as being at issue in the case. Holmes now faces 11 fraud counts.

Holmes, who founded the Palo Alto blood-testing startup at age 19 in 2003, is charged with allegedly bilking investors out of hundreds of millions of dollars and defrauding patients with false claims that the company’s machines could conduct a full range of tests using just a few drops of blood, when she knew the technology had serious accuracy problems. She and her co-accused, former company president Sunny Balwani, have denied the allegations. Balwani is to be tried next year.

Also on Friday, witness Fabrizio Bonanni took the stand for the defense. Bonanni, a scientist and former biotechnology executive testified that he joined Theranos’ board in 2016 — after the company had been deeply shaken by a federal regulator’s finding that its technology was threatening patients’ lives, and Wall Street Journal exposés that raised alarms about testing accuracy and other issues. An executive from a biotech firm had met Holmes and contacted Bonanni about her company. “There were some regulatory difficulties and the difficulties arising from newspaper articles and he thought I could help out,” Bonanni testified.

After meeting Holmes and hearing about the company’s technology and challenges, Bonnani declined her offer that he become chief operating officer but he agreed to an unpaid position on the board. Joining him on the board at the same time were former U.S. Centers for Disease Control director William Foege and former Wells Fargo CEO Richard Kovacevich.

Bonanni had been the subject of earlier discussion Friday without the jury present. Holmes lawyer Amy Saharia told Davila that Holmes’ bringing in expert advisors shows her diligence in trying to fix problems in the company, and weakens the prosecution’s claim that she intended to defraud investors and patients.

Davila, however, noted that prosecutors could argue that “once she found out that the lid was off and everything was in the public eye she scrambled … when you’re in the dark you start to light candles.”

When Bonnani took the stand he testified that Holmes very strongly supported comprehensive efforts to address deficiencies in her company. On the stand, he praised her vision, her “mastery” of all aspects of Theranos’ systems. “I admired her lack of defensiveness and her willingness to listen to other people’s opinions that I thought was remarkable,” he testified.

Under cross-examination, Bonanni said he did not know that before he joined Theranos, the company had voided all the test results from its “Edison” blood-testing machines, which the jury has heard occurred because of accuracy problems.

How long the defense will take to make its case and how many witnesses it will call remain unclear. Earlier court filings show Holmes claimed she was coerced and abused by Balwani, her former long-term romantic partner, and may call a psychologist to testify in support of those claims.

Holmes, charged with a dozen counts, faces maximum penalties of 20 years in prison and a $2.75 million fine if convicted, plus possible restitution, the Department of Justice has said.