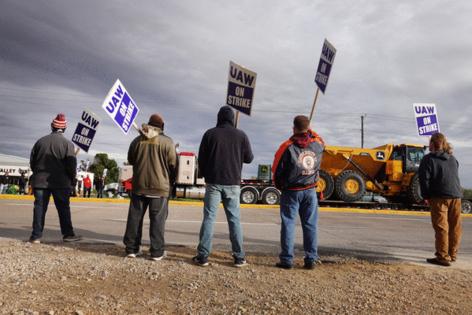 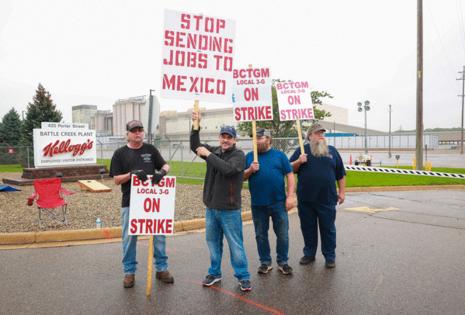 Times were tough in the heartland in the mid-1980s.

Family farms fell into foreclosure in what was known as the Farm Crisis, and John Deere, the equipment manufacturer, cut thousands of workers. In 1986, UAW-represented John Deere workers launched a strike, while the company reported its first annual loss in 53 years, according to the New York Times.

That strike, which ran for 163 days before an agreement was forged, came in a decade when unions in America were facing a tough landscape, and the man in the White House, Ronald Reagan, had made his own mark on labor relations five years earlier when he fired more than 11,000 striking air traffic controllers.

The Detroit Free Press would later report that it was Reagan’s handling of the air traffic controllers’ strike “along with his celebrated embrace of unfettered capitalism, that hammered home to unionists that they were no longer honored guests in the nation’s corridors of power.”

Thirty-five years later, 10,000 UAW-represented John Deere workers are back out on strike in several states, but the landscape might be shifting for unions and one of their most powerful weapons, the strike. John Deere isn't the only employer where picket lines or potential picket lines have been a factor this year. Strikes or threats of a strike have been in play in labor disputes at Michigan-based Kellogg Co., Nabisco and even among 60,000 TV and film workers, who got a tentative deal after threatening to strike.

October has been dubbed “Striketober” by unions and those sympathetic to their cause. “The Daily Show” even highlighted the Kellogg strike with its own version of cereal mascot Tony the Tiger, submitting that “Frosted Flakes is the only cereal flavored by the tears of the people who made it. They’re exploited!”

But to get a sense of how the mood in the country has shifted, it's the two John Deere strikes that offer the clearest contrast, according to Marick Masters, a Wayne State University business professor who specializes in labor issues.

“(In the 1980s) you had very much of an aggressive anti-union environment in which employers were very aggressively willing to try to outsource jobs, and that gave them a lot of leverage and they used it to their great advantage and that resulted in the strike. And now you have a situation in which the balance of power seems a little bit more equalized and employees are in a stronger position,” Masters said.

Now, for instance, companies are complaining of a labor shortage, so it makes it a bit harder to find or bring in temporary workers during labor disputes, which would otherwise put pressure on striking workers. But workers are also feeling pressed to act by a combination of increased inflation, which hurts the buying power of just about everyone, and years of lagging wage gains, Masters said.

“All these things sort of combine to ... create a situation where in some instances where the scales are going to probably be tipped more in favor of the employee than they have been in recent history,” Masters said.