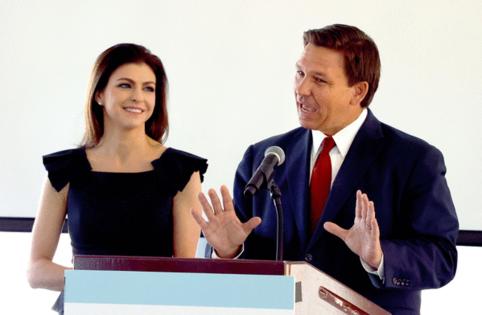 Although the governor may have declared war on employer vaccine mandates, he has also carefully steered clear of any talk that he will ask legislators to outlaw the practice by private employers, as Texas lawmakers tried and failed to do this month when faced with business opposition in that state.

Here, Florida businesses are saying they want lawmakers to let them keep their options open when it comes to knowing what’s best for keeping their employees safe.

“We’ve always been against government mandating what business can do and can’t do,’’ said Mark Wilson, executive director of the Florida Chamber of Commerce. While the Chamber is “very interested in the conversation” over a special session, he said, “we’re not asking for legislation.”

So what is the need the governor and legislators want to address in the special legislative session planned for next month? The goals vary, depending on who you ask.

The governor on Thursday announced a series of legislative initiatives intended to make life more difficult if any companies in Florida fire employees for refusing to get vaccinated or tested. That includes making businesses liable for any medical harm that results from a mandatory vaccination, and repealing liability protections from COVID-19-related claims if businesses impose vaccine mandates on their employees.

Florida law bans governments and businesses from requiring “patrons or customers to provide any documentation certifying COVID-19 vaccination or post-infection recovery,” but it does not explicitly prevent them from requiring vaccinations or testing of employees.

After a wave of high-profile firings of police in Chicago, a football coach in Washington for not getting the COVID-19 vaccine, and fears that a federal rule expected to be announced next week could force more layoffs, DeSantis said he wants legislators to preemptively protect people’s ability to make a choice about whether they want to be vaccinated.

But in interviews with leaders from hospitals to hotels, many Florida businesses say they don’t have an immediate problem with the current system. Others said they are troubled by the governor’s proposal that the state would roll back liability protections on private companies if they want to require vaccines.

“This is very contradictory to where the governor has positioned this state,’’ said Mark Trowbridge, president and CEO of the Coral Gables Chambers of Commerce.

“We have been rolling out the red carpet to attract new employers and working to help all types of employers to thrive. So if someone wants to come to Florida but wants their employees vaccinated and now they can be held liable, this might make them think twice.’’

A Texas bill pushed by Gov. Greg Abbott to make businesses who require vaccinations vulnerable to discrimination lawsuits was rejected by the Texas Legislature this week when lawmakers adjourned a third special session without hearing the bill.

For the state’s large non-profit hospitals, “only one or two hospitals have mandated the vaccines,’’ said Justin Senior, CEO for the Safety Net Hospital Alliance of Florida. “But for the most part, they have found workarounds that are making it work.”

About 90% of all doctors in the state’s largest non-profit hospitals and about 60% of all nurses have been vaccinated, he said.

But when the federal rule kicks in from the Centers for Medicare and Medicaid Services requiring employees at health care facilities that receive Medicaid or Medicare funding to have staff vaccinated, he knows there will be confusion.

“We’re a little worried we’re gonna end up stuck in the middle between a state law and a federal law that are in conflict,” Senior said. “But we’ll we’re just gonna have to wait and see.“

In the next week, the Occupational Safety and Health Administration will issue its rules relating to businesses with 100 or more employees and is expected to require them to offer either a vaccine or a weekly testing option to keep their workplaces safe from COVID-19.

That has many employers with more than 100 employees worried, especially if employees choose to opt-out of the vaccination requirement and need weekly tests.

Organizations such as the U.S. Chamber of Commerce have flooded OSHA with questions about how that rule will be implemented and what availability there will be for employee COVID-19 tests.

“It is clear our members do not support a vaccine mandate for all employers. They are concerned about losing employees when they are already suffering monumental labor and staffing challenges,’’ said Carol Dover, president and CEO, Florida Restaurant and Lodging Association. “They are questioning who will pay for the extensive testing that will be necessary in order to continue to employ individuals who have made the personal choice to not be vaccinated.”

At a national level, however, the Business Roundtable, whose membership is comprised of corporate CEOs, said they are supportive of the Biden mandate because they affirm policies already in place in many companies.

At the governor’s news conference on Thursday, DeSantis repeated his vow to fight the federal mandate on private employers, federal contractors and health care providers in court. Attorney General Ashley Moody stood by him in agreement.

Trowbridge said that in Miami-Dade County only about 1,500 of 86,000 companies have more than 100 employees and would be required to abide by the OSHA COVID-19 rule, so “it’s not going to have a strong effect.”

Business groups like the Coral Gables Chamber are joining with the Health Foundation of South Florida, Miami-Dade County and several other organizations to launch the “We did it” campaign to encourage employees to get vaccinated, he said. The effort receives no state money but is being reimbursed through a federal FEMA grant.

What is having a big effect on local businesses, however, Trowbridge said, is the sustained labor shortage hampering businesses from being able to hire employees. He noted that two long-running local restaurants have recently announced they will be closing for good.

“So when you hear about these discussions happening at the state level, you wonder if they are talking to the folks at the ground level?,’ he asked. “Are they doing what they need?”

Florida Democrats also reject the idea that there is a pressing need for additional legislation. They say the governor’s call for a special session is “political theater,” aimed at appealing to a national audience for his ambition of running in a 2024 Republican presidential primary.

Meanwhile, Republican leaders in the House and Senate, whose members have been meeting this fall in committee hearings, also have not suggested the need for immediate legislation — until now.

“In the coming days, we will review the Governor’s specific proposals as well as discuss our own ideas for legislative action, ‘’ said Senate President Wilton Simpson and House Speaker Chris Sprowls, both Republicans, in a joint statement.

But Sen. Kathleen Passidomo, a Republican who this week was designated Senate president in 2022 if Republicans retain control of the Senate, was asked if she would support legislation to prohibit companies from requiring employees to be vaccinated or tested. She would not comment.

“I support, you know, freedom for businesses to make sure that they’re successful,’’ she said. “So I think we have to take a look at what type of legislation would be proposed. So unless I see it, I can’t really comment on it.”

Sprowls and Simpson added they might want to also use a special session as an opportunity to add another item to the agenda: having Florida “withdraw” from the “onerous federal regulations” placed on Floridians by the OSHA “and establish our own state program.”

Since the onset of the pandemic, OSHA has received and closed nearly 700 complaints against Florida businesses, according to its website.

GOP Sen. Keith Perry, who owns a Gainesville-based roofing company with 100 employees, said he will not abide by a federal mandate that requires him to have employees show proof of vaccinations or tests and has filed a bill for the regular session, co-sponsored by Rep. Andrew Sabatini, to ban vaccine mandates.

“There’s a balance in everything that we do,’’ he said. “We’re going to now go into a special session and it will be the perfect time to have debate testimony, public comment and make a decision.”

A rule of thumb for every special session is that the governor or presiding officer doesn’t call legislators back to Tallahassee to convene a $72,000-a-day session unless they can be assured of having the votes to pass what they propose.

In what may sweeten the appeal of the legislative package to lawmakers, the governor is also asking for addition sanctions and clarifications. He wants legislation allowing parents to collect attorney’s fees if they win a lawsuit against a school district for enacting illegal coronavirus restrictions and more legislation clarifying the existing law that makes it illegal for governments and schools in Florida to mandate the vaccine and testing options for government employees.

“Too many of our esteemed heroes are facing termination thanks to heavy handedness at all levels of government,’’ Simpson and Sprowls said in their statement. “During the upcoming special session, our goal is to make our laws even more clear that Florida stands as refuge for families and businesses who want to live in freedom.”

While Wilson of the Florida Chamber agrees with the governor that the Biden mandate is likely unconstitutional, many of the chamber’s members from the 221 local chapters across the state are already doing what the Biden rule requires: offering employees options to take weekly tests in lieu of a vaccine.

“Most of our members are not mandating the vaccine by far, but those that are are generally giving options and letting employees get a vaccine or get tested and mask up or work from home,’’ he said. “We are actually searching for companies that are not.”

Other organizations, including Associated Industries of Florida and the National Federal of Independent Businesses, said it was too early to comment on the special session until they see the specifics of what legislators propose.

“We continue to work very closely with our local health care partners and the business community to identify the best options for all to stay safe and remain productive,’’ said Bob Rohrlack, president and CEO of the Tampa Bay Chamber of Commerce, in an email.