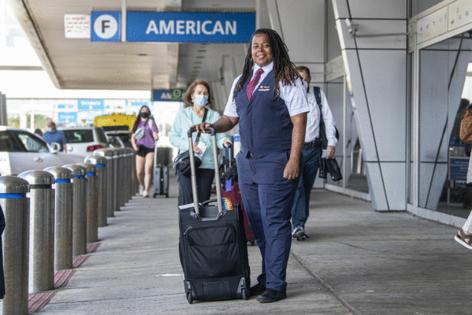 Close to 360 flight attendants who work for an American Airlines regional carrier are heading into the last days of a strike vote this week over frustrations with low pay and stalled contract negotiations, union officials said.

About 200 of the Piedmont Airlines flight attendants are based out of Philadelphia International Airport. The carrier is an American Airlines subsidiary that flies under the American Eagle brand. In addition to its PHL base, it operates a second one in Charlotte, N.C., and flies to more than 50 locations on the East Coast.

Contract talks between Piedmont and the flight attendants' union have stretched out for three years. Strike ballots went out to union members in late September, and the votes will be tallied Thursday.

"We've worked the front lines of the pandemic, and we can no longer afford to work at Piedmont," said Keturah Johnson, president of the Association of Flight Attendants-CWA Local 61. "And this is the thanks we get — to continue to stall our negotiations."

New hires making about $19 an hour, for 72 guaranteed hours per month, earn an average base pay of nearly $16,500, according to the union. Flight attendants in their fifth year have an average base of $24,287. That doesn't include other factors that can boost pay, like flying additional trips.

"Piedmont values the work that our more than 350 flight attendants do to take care of our customers and each other every day," a company spokesperson said. "We are actively engaged in contract conversations with the AFA to ensure that our team members feel supported and valued and look forward to continuing our negotiations with the AFA in November."

According to the airline, a "joint decision was made to pause contract negotiations" in 2020 because of the coronavirus pandemic, and talks resumed in June.

Johnson said wages are such a problem that the union set up food banks in crew rooms at PHL and Charlotte.