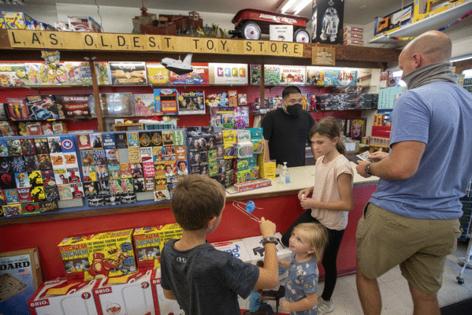 If everyone's holiday gifts are stuck on a ship somewhere, then why isn't toy store owner Don Kipper worried?

Kipper and daughter Lily run Kip's Toyland, billed as Los Angeles' oldest toy store, and Kipper the elder contends he really isn't fretting over massive global supply chain problems that have left both small merchants and big-box retailers frantic about whether they will receive all the merchandise they need for the vitally important holiday shopping season.

The Kippers realized months ago that the classic toys carried by the family operation were becoming harder to get and taking longer to arrive. The buying department — that's Lily — kicked into overdrive, well before the full magnitude of the supply chain mess became apparent, ordering much more than usual in case products were held up in transit.

"It became clear to us that this was going to be an issue," said Kipper, whose father Irvin opened the store in 1945 after he was released from a World War II prisoner of war camp and was looking for a fun line of work. "You have to do whatever it takes to get the merchandise to stay in business."

Now it's a waiting game to see if they stockpiled enough Lincoln Logs, Pick-Up Sticks, dolls, board games and the like. Pretty much everything in the old-fashioned store, located in the landmark Original Farmers Market since 1956, travels by cargo ship from Asia, Kipper said.

Supply chain bottlenecks are delaying products, boosting prices, hurting businesses and slowing economic growth to such an extent that President Biden stepped in Wednesday with an announcement that the Port of Los Angeles would operate around the clock to ease the logistical pileup, similar to a pilot effort started recently by the neighboring Long Beach port.

The toy industry is particularly susceptible to shipping delays because 85% of the 3 billion toys sold each year in the United States come from China, said Ed Desmond, executive vice president for external affairs at the Toy Industry Assn.

"So you can see the dependence and reliance our industry has to get their products over here and onto the shelves and stores here," Desmond said.

But it's not just toys. A long list of items destined for factories, retail shelves and consumer doorsteps have been snagged, including lumber, cars, furniture, electronics, bicycles, clothing and shoes.

The supply chain has been disrupted by many factors: the pandemic, booming consumer demand, raging storms, shortages of cargo ships and containers as well as a shortage of people willing to drive trucks or stock warehouse and store shelves for the wages offered. In China and other Asian countries, COVID-19 outbreaks have periodically closed factories and seaport terminals.