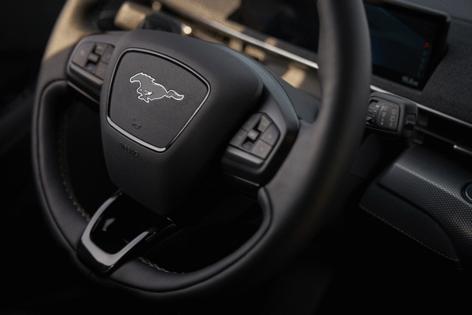 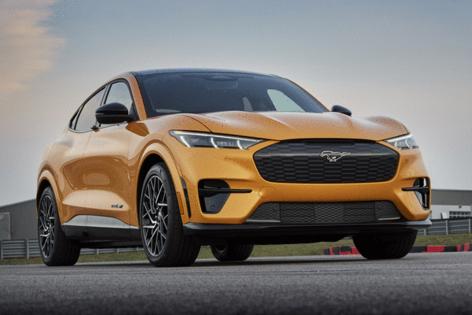 San Francisco — Hustling over California’s twisted two-lane Pacific Coast Highway in a Mustang GT, I suddenly came upon a three-car moving road block. I flattened the right pedal. ZOT! The GT gulped the trio like a killer whale feeding on fish.

No downshift, no V-8 roar, no rear tail wag.

Say hello (and a quick wave goodbye as it disappears into the distance) to a different kind of Mustang GT — the 2022 Ford Mustang Mach-E GT. A kilowatt-guzzling hatchback SUV. Infused with the same wicked DNA as its gas-guzzling V-8-powered Fastback forebear, it’s even dressed in bright Cyber Orange to match Papa Pony’s Grabber Yellow.

This is the one we’ve been waiting for.

Ford Motor Co.'s Blue Oval has been chasing Tesla since the Palo Alto-based automaker wowed the world in 2016 with the Model 3 and changed the electric game with an accessible, lightning quick, Apple phone-simple EV that made even gas-drinking motorheads like me go weak in the knees (I bought one).

Ford dropped what it was doing and gave chase. Maybe it was enraged Tesla had stolen its iconic “Model” moniker to stake its claim as the Model T of the 21st century. Maybe it admired a startup for cracking the battery-electric code after Ford floundered with the C-Max and first-gen Escape Hybrid. Maybe both.

But Ford understood it would have to bring out its big brand guns to compete with Tesla’s mega-brand. The Mustang Mach-E was born and it slavishly followed the Tesla Model Y (a Model 3 in ute clothing) formula: 15-inch center screen, frunk, 300-mile range, remote app, $40K starting price.

When I got my hands on the new pony, I saddled it up alongside a Model Y and tested them toe-to-hoof. The Mach-E is very good — yet doomed to live in Tesla’s shadow. The apprentice to the OG. Mach-E sales are a modest 2,000 a month — outsold by Model Y, 6-to-1.

Like the V-8-powered Mustang Fastback, Mach-E gets a steroid booster over its standard 346-horse, 428-torque sibling. Optimizing the same 88 kWh battery pack, the GT pumps out a Mercedes AMG 63-like 480 horsepower and a gob-smacking 634-pound-feet of torque when equipped as the Performance Edition. That’s right, a performance package just like the sports car offers: gummy Pirelli summer tires; active suspension; Brembo brakes.

The fate of global markets now depends at least in part on laboratories around the world probing the omicron COVID-19 strain, potentially leaving investors with weeks of uncertainty in the wait for answers.