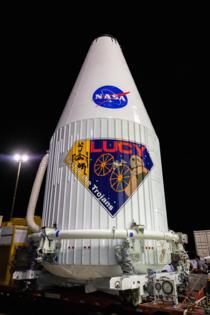 Hoping to piece together the history of the solar system, NASA is set to embark on one of its most ambitious missions: Lucy, a 12-year journey to observe the primitive asteroids trapped in Jupiter’s path around the sun.

NASA will attempt to launch the probe from Cape Canaveral Space Force Station’s pad 41 on Saturday between 5:34 a.m. and 6:49 a.m. aboard United Launch Alliance’s Atlas V rocket. The weather for the launch is currently 90% go.

Named for the hominid fossil discovered in 1974 Ethiopia that scientists came to call Lucy, the spacecraft will fly by seven Trojan asteroids, each one named for a hero of the Trojan War or a character in The Iliad.

Scientists once thought the asteroids originated from the same bodies that created Jupiter but now believe they could be from all over the solar system, scattered around by the gravitational pulls of Saturn, Uranus and Neptune during the earliest days of the solar system billions of years ago.

The asteroids have never been visited before, and this will be the first mission to travel that far into the solar system using solar power instead of nuclear energy. All told, the spacecraft will make three and a half giant loops around the sun and log 4 billion miles.

“These things really are the fossils of what planets formed from,” said Hal Levison, a scientist at the Southwest Research Institute and the principal investigator for the Lucy mission. “We understand planets formed as these things hit each other and grew and competed, and these are the leftovers of that. So if you want to understand where the solar system came from you have to go to these small bodies.

Lucy, which was built by Lockheed Martin over about 14 months, weighs 3,330 pounds, is about the size of a car and spans four stories once its two solar arrays fan out.

Similar to the tools used on NASA’s New Horizons mission to Pluto and OSIRIS-REx touchdown on the asteroid Bennu, Lucy is equipped with special instruments and telescopes to determine what the asteroids are made of and measure the temperature of their surfaces. It also has black-and-white and color cameras to photograph them and search for any moons, dust clouds or other satellite bodies.

“When we fly by, there isn’t going to be a label on the object saying ‘made in the outer solar system’ with a date stamp,” Keith Noll, Lucy project scientist at NASA’s Goddard Space Flight Center, said. “It really is putting together clues. And really all we can do is get all the data we can get.”

But figuring out how to get Lucy that far out into the solar system exactly where the Trojans are stuck in orbit took some creativity. Devising the course, Levison said, was “part science, part art, part luck.”

First, after ULA’s Atlas V rocket jettisons the spacecraft, Lucy will take a year doing a loop around the sun and then fly by the Earth for a gravity boost to pick up some speed. That’ll fling Lucy out for another two-year spin around the sun, going even faster now, and tee it up for a second gravity assist from Earth to push the spacecraft in the right direction to reach the Trojans.

First up, Lucy will visit the swarm of asteroids in the cluster leading Jupiter, starting in 2027 with Eurybates, then Polymele, Leucus and Orus. In 2030, it’ll fall back toward Earth for one last gravity assist that’ll slingshot Lucy toward the trailing cluster this time, Patroclus, Menoetius and Queta, wrapping up the mission in 2033.

Without those boosts from Earth, it would require five times the fuel to pull off the mission, making it unfeasible.

“I just want to tell you when I first saw that orbit, I looked at this like, ‘You gotta be kidding me. This is possible?’” said Thomas Zurbuchen, associate administrator for NASA’s science mission directorate. “It just seems absolutely crazy.”

The window for Lucy to take that route is fleeting, though. Saturday is the first day in a three-week window during which the planets are aligned just right to ensure the spacecraft will make it to the Trojans. NASA intends to get Lucy as close as 600 miles from each asteroid, which will require incredible precision.

Otherwise, it’s likely the mission, which has cost $981 million, would be delayed indefinitely. Levison has previously said the unique and complex trajectory would not be possible again in the near future.