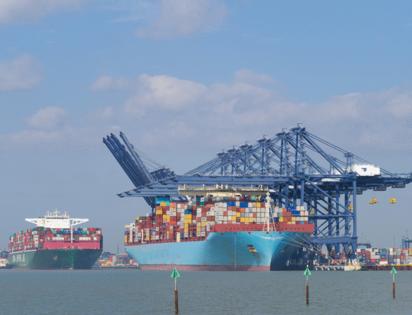 Sirens blared as cranes lifted containers from the Ever Genius, a ship stretching four times the width of Buckingham Palace along a berth this week at the U.K.’s Port of Felixstowe. The warning shrieks for British dockworkers might well have been alarms for the global economy.

Handling more than a third of the U.K.’s ocean freight, Felixstowe is battling a collision of incoming full containers and outgoing empties. Logjams like it are worsening around the world, including on the U.S. West Coast, where Los Angeles port terminals will run 24 hours a day at the urging of President Joe Biden. A tropical storm in the Pacific, meanwhile, threatens to further slow shipping from Shenzhen to Singapore.

For the U.K., the supply crunch is more acute because it’s more dependent on trade than many other advanced economies and because Brexit exacerbated a trucker shortage. The shipping crisis is converging with spiking energy costs at just the wrong time if Christmas, as Prime Minister Boris Johnson promises, will be better than last year’s locked-down holidays.

If goods shipped to the island nation from Asia aren’t on the water by now, experts doubt whether they’ll make it by Dec. 25. The average door-to-door transit time for ocean cargo to the U.K. from Asia has risen to more than 70 days, up from about 55 a year ago, according to Hong Kong-based Freightos, an online shipping marketplace.

The congestion at Felixstowe is causing such long delays that Copenhagen-based A.P. Moller-Maersk A/S, the world’s largest container carrier, has found it faster to reroute some larger vessels to mainland Europe to offload cargo onto smaller ships that return to U.K. ports.

Felixstowe has just two berths for the industry’s biggest ships, but plenty of smaller docks, according to Maersk.

In a statement on Wednesday, Maersk said it’s working closely with Felixstowe operators to help “alleviate the situation and steadily continue the evacuation of empty containers from the yard to make possible the discharge of full containers.”

As of Thursday, Felixstowe users were being told not to bring empty containers to Maersk or Taipei-based Evergreen Marine Corp. because they had exceeded their allocated storage space, according to a memo seen by Bloomberg News. This is forcing lorries to take longer trips to alternative ports to get rid of empty containers, pushing up their costs, said Natalie Caraccio, director of Shore Logistics, a Felixstowe-based haulage firm.