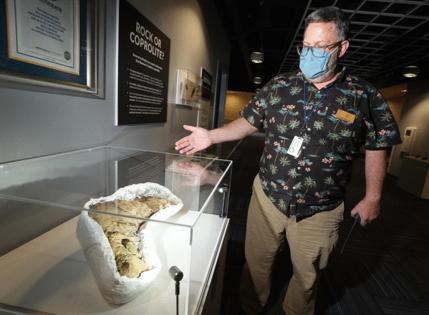 ORLANDO, Florida — At more than 26 inches long and 20-plus pounds, Barnum is the world record holder for the largest recorded pieces of feces ever made by a carnivore, laid by a Tyrannosaurus rex as much as 70 million years ago.

Named for the paleontologist who discovered the T. rex, Barnum Brown, the piece of coprolite — as fossilized poop is called — is on display at the Orlando Science Center with more specimens from the Poozeum, the world’s largest collection of coprolite, owned by George Frandsen of Jacksonville, Florida.

To share with museums, Frandsen, 42, had to get the pieces in his collection insured. He says that when he first started asking insurance companies to give him a policy on Barnum, “They’d just start laughing.”

That’s unsurprising to Roger Maharaj, senior underwriter for Burns & Wilcox in Tampa. “There are only a handful of companies probably in the United States that would go after that,” he said.

Maharaj works in what is known as Florida’s surplus lines of insurance. Most things that get insured fall into what is known as the admitted market, meaning that the policies must conform to state regulations and are backed by state law.

In the surplus lines, rules can be a little looser. Not all state regulations have to apply to surplus policies. If that sounds riskier, it is, but it allows companies to cover potential losses other companies don’t want to take on.

They cover everything from motorized surfboards to amphibious cars to kidnapping ransoms. Metro Orlando alone has more than $6,000 in kidnapping premiums.

Sometimes it’s for common but overlooked things one sees every day, such as solar panels.

“A lot of companies don’t want to insure them because they can get damaged in storms or fly off of roofs,” Maharaj said.

The Dearborn automaker generated $1.8 billion of net income on revenue of $35.7 billion, a roughly 5...Read More

Boeing resumed losing money last quarter, its losses caused both by continuing pandemic-driven downturn in air travel and by self-inflicted wounds such as the 787 manufacturing mess.

At least 59,000 meatpacking workers contracted the coronavirus in the first year of the pandemic as the virus rapidly spread in plants’ cramped conditions, according to internal documents from five major meat ...Read More

The Illinois attorney general’s office issued a warning Tuesday to be extra careful about which treats end up in your child’s hands this Halloween — they could be a cannabis edible look-alike that will impart more ...Read More

The auto industry has faced a global shortage of semiconductor ...Read More

Silicon Valley has a powerful new adversary: its own workforce.

Attracted by high salaries, world-class perks and the promise of being able to make a positive difference in the world, employees of the biggest tech and ...Read More