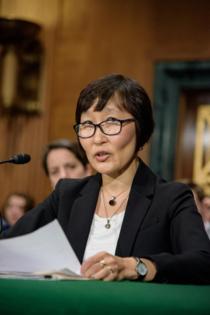 Saule Omarova, a Cornell law professor nominated to lead the Office of the Comptroller of the Currency, is viewed by supporters and critics alike as a regulator who could rein in the financial technology industry.

Her supporters see potential to set rules for a technology that they say poses increasing risk to the financial system. Her critics, including many in the fintech sector, say she would stifle innovation that technology is bringing to financial institutions.

Mick Mulvaney — the former House Republican member and White House chief of staff during the Trump administration, now on the board of advisers for the Chamber of Digital Commerce — said in a statement that Omarova’s confirmation would have a “chilling effect” on innovation.

Omarova has written extensively about fintech, warning that the speed and opacity it brings to the financial industry could circumvent public oversight and pose a risk to the stability of the whole system. If confirmed, she would lead the agency that charters and oversees national banks.

Her supporters say she would take over the OCC at a critical juncture, when the fintech industry is poised to bring unregulated risk into the banking industry. They liken the dynamic to the banking sector’s growing involvement in derivatives markets ahead of the 2007-08 financial crisis, another focus of Omarova’s scholarship.

“She knew the risks that financial institutions can pose to housing and to our whole economic system. She warned in those early days about what in fact did happen in 2008,” said Brown.

The OCC, an agency within the Treasury Department, charters, sets standards and supervises national banks. Most relevant to the fintech industry, the comptroller determines what regulations fintech companies offering services similar to banks face.

“I think that she will be vigilant in figuring out what those rules they should live under (are),” Brown said in an interview.

Omarova’s arrival at the agency would come amid a larger crackdown on cryptocurrencies and fintech by the Biden administration. Securities and Exchange Commission Chairman Gary Gensler has said the exchanges where cryptocurrencies trade should be subject to stricter regulations. Treasury Secretary Janet L. Yellen has pushed for better enforcement of cryptocurrency tax obligations.

Q: Can you address the difference, if any, between non-oxygenated versus other gas? One gas station I use has regular octane 87, premium octane 92 and non-oxygenated octane 91. They say their premium gas contains some ...Read More