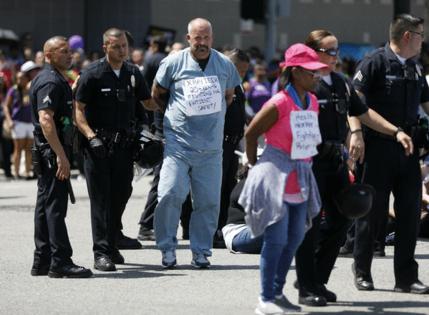 Thousands of Kaiser Permanente healthcare workers in Southern California voted to authorize a strike against the healthcare giant amid strained contract negotiations, as the workers continue to protest what they describe as severe staffing shortages that put both medical staff and patients at risk.

The union contract expired Sept. 30, and the two sides have yet to agree on a new one. A strike would affect Kaiser hospitals and facilities in more than a dozen Southern California cities.

Concerns about safety at work have led nurses to strike across the country over the last year. In July, about 1,400 registered nurses at USC Norris Cancer Hospital in Los Angeles and Keck Hospital of USC staged a two-day strike, citing concerns such as long shifts, not enough staff and an overreliance on contract nurses. Nurses at San Francisco's Chinese Hospital and Riverside Community Hospital also went on strike earlier this year.

The regional strike vote comes as negotiations are underway for a national contract between Kaiser and the Alliance of Health Care unions, which represents UNAC/UHCP as well as 20 other unions covering a total of more than 50,000 workers across the country.

In California, UNAC/UHCP President Denise Duncan, a registered nurse, said talks with Kaiser have brought little progress toward the union's goals, including more robust staffing and retention. That prompted the strike vote, which Duncan said brought out voters in record numbers for the union. A union representative said the turnout rate in a vote tallied early Monday was 86%.

"It shows they don't take this lightly," Duncan said. "They want to see a change."

Arlene Peasnall, senior vice president of human resources at Kaiser Permanente, said in a statement that it is "not uncommon" to continue negotiating without a contract in place, and that the company is committed to working quickly to reach an agreement. "We ask that our employees reject a call to walk away from the patients who need them," Peasnall said in the statement.

The vote does not automatically trigger a strike, the statement said. Unions are required to give the company a 10-day notice before any work stoppage.

Bargaining with Kaiser continues this week and Duncan said she is hopeful union leaders and Kaiser Permanente will reach an agreement by the end of the month, ideally avoiding a strike.

Top of mind for healthcare workers is a new stratified pay system the healthcare giant proposed that the union says would depress wages for new nurses and other recruits. Workers say the system could fuel more shortages at Kaiser's Southern California hospitals and clinics.

In a vote tallied Sunday night, 3,400 Kaiser Permanente nurses and other healthcare workers represented by the Oregon Federation of Nurses and Health Professionals also voted to authorize a strike.