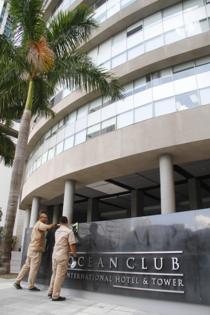 MIAMI — Orestes Fintiklis thrust himself into the public eye with an audacious acquisition of a Panamanian luxury hotel that sported the surname of the 45th U.S. president, Donald J. Trump.

The Cypriot, who resides in Miami, wowed local media in Panama and Florida less than a year later in March 2018 when workers crowbarred Trump’s name from hotel signs, one letter at a time.

The Trump Organization’s management unit, which had a lucrative contract, was tossed out in the process, and that became the subject of ongoing litigation.

In the end, the bowtie-wearing pianist and his Panama-based investment company artfully vanquished the famous New York real estate dealmaker.

But Fintiklis shared two particular traits with the man he outmaneuvered — a penchant for secrecy and knowing how to tap influential friends.

Documents found in the Pandora Papers, made public on Sunday in a massive leak of 11.9 million confidential documents from offshore companies and the 14 law firms that helped create them, reveal new details about the very private Fintiklis and his acquisition of the Trump Ocean Club International Hotel and Tower, now converted to a Marriott.

It was an acquisition of a property already shrouded in secrecy and irregularities. The first financier was a Brazilian who after being charged with fraud and forgery involving another deal became a fugitive. The developer who saw the project through filed for bankruptcy after defaulting on bonds that raised the money to build the futuristic, sail-shaped, 70-story condo and hotel.

Much of the Trump hotel saga in Panama is well known. But there has been little attention on Fintiklis, now 42, who at the time of his bold move left much of the world wondering, “Who is that guy?” One former senior Panamanian official at the time described Fintiklis as someone “nobody ever heard of, even in Panama.”

The Fintiklis acquisition was carried out by his Panamanian private equity company Ithaca Capital Partners, which by definition is a limited partnership that does not have to make much public. The Pandora Papers show Ithaca, relatively small by Wall Street standards, used a network of mostly anonymous companies in the British Virgin Islands, Delaware and Panama to create a complex business structure.

That web of complexity was stitched with help from a top Panamanian law firm specializing in secrecy, a firm whose ownership is interwoven into the very fabric of Panamanian politics.