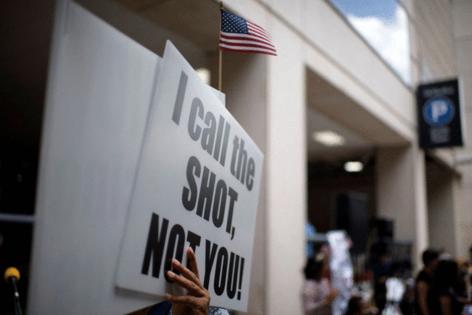 As more employers require their workers to get vaccinated against COVID-19, more workers are finding religion. Or rather, "sincerely held religious beliefs" that, they say, prevent them from getting the shots.

Hundreds of Los Angeles firefighters have sought exemptions from the city's vaccine mandate for religious or medical reasons, and thousands of Los Angeles Police Department employees are expected to do the same. And they may be the leading edge of the wave of workers seeking exemptions, as the federal government is preparing to require employers with 100 or more workers to order vaccinations or weekly coronavirus testing for all employees. Federal employees are already required to be vaccinated even if they work from home, with no testing alternative, and a similar requirement is being developed for federal contractors and subcontractors.

Nicholas De Blouw, an employment attorney and partner at Blumenthal Nordrehaug Bhowmik De Blouw in Los Angeles, said he's getting calls "every single day" from people facing a vaccine mandate — including three in about 20 minutes on Wednesday morning.

But what are the rules surrounding religious exemptions? What constitutes a "sincerely held" belief? And how much leeway do employers have when faced with a torrent of exemption claims based on religion? The Times talked to experts in employment law and religious rights, and here are their answers to these and other questions.

What is the legal landscape?

The Supreme Court upheld the constitutionality of vaccine mandates more than 100 years ago, but has made it clear that employers can't run roughshod over their workers' religious beliefs. The protections for religious objectors are in California law, the U.S. Constitution and federal law, particularly Title VII of the Civil Rights Act of 1964, which requires private companies to make "reasonable accommodations" for workers who have "sincerely held" religious beliefs that conflict with vaccination.

Employers hoping to stand on firm legal footing need to look at each employee's request and go through an interactive process with the employee to seek a reasonable accommodation for sincerely held beliefs.

"That process is really key," said Mark Phillips, a partner at the Reed Smith law firm in Los Angeles. Employers can't dismiss a request for a religious exemption out of hand, "even if it may initially seem ridiculous," Phillips said. The employer has to engage with the worker "not only to find out the nature of the request, but also to find out if accommodation is possible and reasonable."

Angel James Horacek, an attorney in Culver City, Calif., said California's ban on "religious creed" discrimination applies not just to beliefs based on an organized religion's teachings, but also to "beliefs, observances, or practices, which an individual sincerely holds and which occupy in his or her life a place of importance parallel to that of traditionally recognized religions."

The board first ...Read More

Politicians for years have been making a show of wringing their hands over sky-high prescription drug prices. And no drug has drawn more scrutiny, or calls for action, than insulin.

There’s a silver lining to the bummer news that dropped, along with the stock market, about the new omicron variant on Black Friday:

Oil prices, which fell along with stock prices, failed to recover on Monday and could ...Read More