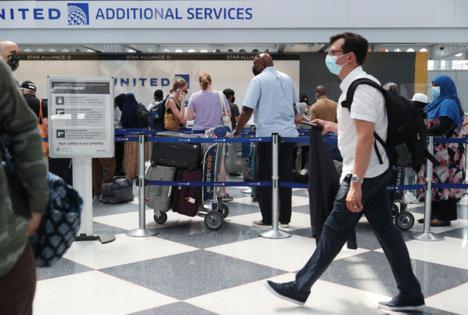 Passenger satisfaction at America’s airports is starting to dip from all-time highs as airports get busier, with O’Hare International Airport ranking last and Midway Airport in the bottom half, according to a study released Wednesday.

Overall, airports still scored higher than ever on the 2021 North American Airport Satisfaction Survey by J.D. Power, a marketing information services firm. But the highest ratings came during the first half of the study, when fewer people were flying. Since January, satisfaction scores “steadily declined,” J.D. Power said in a news release.

“During the height of the pandemic people were just happy to get out of the house … and now their expectations are changing,” he said.

O’Hare and Midway both scored higher than last year’s record satisfaction ratings even as O’Hare went from second-last to last among the biggest North American airports, and Midway remained in the bottom half of airports with between 10 million and 32.9 million passengers per year.

According to the airports’ websites, most dining options have reopened. Among those still temporarily closed are five of O’Hare’s 19 Starbucks locations, Eli’s Cheesecake in Terminal 1 and Publican Tavern in Terminal 3, and at Midway, Pegasus on the Fly and True Burger Co.

O’Hare’s low ranking relative to other major airports is primarily due to passenger ratings of its terminal facilities, Taylor said.

The $8.5 billion rehabilitation and expansion, slated to be the largest and most expensive terminal revamp in the airport’s history, should help once any disruption during construction ends, he said.

Plans include a new global terminal and three new concourses, along with an expansion of Terminal 5 expected to be fully in use by 2023.

The city’s Aviation Department could not immediately be reached for comment.