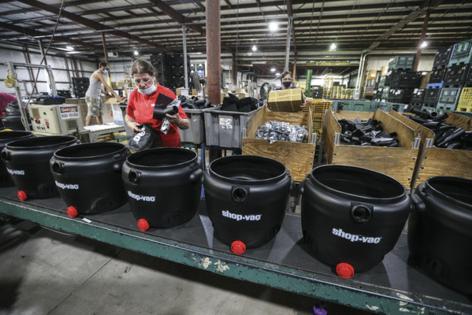 WILLIAMSPORT, Pa. — A year ago, the founding family of Shop-Vac Corp. left town and abruptly shut down the iconic vacuum company, leaving bankers to clean up the mess. Many workers feared that the company would be stripped and scrapped, and that production of yet another American brand would be sent overseas.

But something happened on the way to extinction. The bank indeed sold Shop-Vac's assets to a Chinese company. But the new owner, through its subsidiary GreatStar Tools USA, decided to keep Shop-Vac's operations in Williamsport, led by new American managers.

More than 200 of the old workers — about half of the previous Pennsylvania workforce — were retained or rehired this year. If the company rebounds as hoped, the new managers say, 100 more could be hired in the next year.

"We're still in business," said an elated Brian Machmer, a 25-year Shop-Vac veteran. He repairs the giant injection molds used to produce plastic canisters, hoses, and nozzles for wet-dry vacuums, which were invented here in north-central Pennsylvania and now occupy places in millions of garages and shops across America. "I plan on finishing my career here," said Machmer, 58.

"It's very positive, very exciting," said Robin Keller, 42, a product manager who was let go by Shop-Vac last year, found another job, and then was persuaded to return to his old company in June.

Keller and others said the new Shop-Vac's atmosphere is refreshing compared with the gloom of working at a company that had lost its bearings, got buried under debt, and could not compete.

Everybody knew there was mismanagement under the leadership of Jonathan Miller, whose father founded Shop-Vac in 1953. But the company's secretive leaders said little to the workforce and less to the community.

"It was scary," said Vincent Knauff, 59, the engineering lab manager, who has worked for Shop-Vac for half of his life. "You were scared to pick up the phone, scared to answer a page." Knauff, who was unemployed for more than four months after the closure was announced on Sept. 15, 2020, was rehired by the new owners this year.

Lawrence, 63, grew up in the Philadelphia suburbs and has worked at several firms across the country, including the last nine years as president for Workrite Ergonomics, a California manufacturer of height-adjustable office accessories.

Lawrence said he and his wife longed to return to Pennsylvania to live near their son, a pharmacist in West Norriton, when GreatStar recruited him for Shop-Vac. His mission: Rebuild Shop-Vac's culture and restore harmony with the mighty home-improvement store chains that control the retail market for hardware.

"A lot of relationships were damaged with our retail and distribution partners," said Lawrence, who grew up in Parkesburg, Chester County. "We have been spending a large part of our energy rekindling those relationships. Some have been very receptive because our competitors didn't do a very good job while we were absent."

Shop-Vac has signed a deal to supply Menards, a Midwestern home-improvement chain with 300 outlets. And Lawrence said that the company is close to sealing a deal to be a primary brand at Lowe's, the second-largest national home-improvement chain after Home Depot. Lowe's had been a key outlet for Shop-Vac before the company closed last year, and it also has long-established supply relationships with other GreatStar Tools brands.

Shop-Vac's pitch to retailers is that because it still produces the larger vacuum units in Pennsylvania, it can more quickly fill orders than its major competitors, who have moved nearly all production of wet-dry vacuums overseas. Deliveries of imported goods have slowed because of post-pandemic supply-chain congestion, and logistics is no longer cheap: The cost to ship a container from China to America has soared to more than $20,000, up from $3,500, Lawrence said.

"That is putting incredible cost pressure on our competitors," said Lawrence. "It's also creating empty shelves for the retailers and distributors because the supply is so unreliable. That's a big advantage for us."

As a bonus for Williamsport, GreatStar is also relocating some manufacturing operations to Shop-Vac from another subsidiary, SK Hand Tools, a suburban Chicago company GreatStar acquired in July. SK makes premium ratchet wrenches and the kinds of tools that are now produced and used in Shop-Vac's facility, so GreatStar saw synergies in relocating some of its operations from Illinois to Shop-Vac's sprawling plant.

"Chicago is a little higher-cost market to operate than in Williamsport," said Lawrence.

Business and political leaders in Williamsport, who were blindsided by Shop-Vac's closure, are delighted with the company's revival. They had feared the worst.

Jason Fink, president of the Williamsport/Lycoming Chamber of Commerce, said that GreatStar was the only potential Shop-Vac buyer interested in maintaining operations in Williamsport. GreatStar outbid "a couple of U.S.-headquartered vacuum companies that were looking at shipping the brand to Mexico," he said.

When GreatStar announced in December it was buying Shop-Vac for $42 million, the prospect of Chinese owners taking over one of Lycoming County's prized manufacturers was not universally applauded. Amid a polarized political climate in which China is frequently cast as a villain, Fink heard much grumbling that the new buyers would surely impose a Chinese work culture, or worse, dismantle operations and move out.

Fink said GreatStar's actions speak to a company that is reestablishing local roots. Shop-Vac joined the Chamber of Commerce and reached out to community leaders, something the previous owners had shunned.

"Shop-Vac has made a commitment to the Williamsport Area, which is very good news," said Williamsport Mayor Derek Slaughter.

Lawrence, whose expertise is in marketing, said he has changed some practices to send a more positive message to the workers and the community. He converted the old chief executive's wood-paneled office into a conference room and moved his workspace among the other administrative offices. When he walks on the factory floor, workers exchange friendly banter.

In August, Shop-Vac held a two-day tent sale at its headquarters to empty its warehouses of odd lots of vacuums that it acquired at a discount from the previous owners. Its very American workforce conducted the sale. Buyers with pickup trucks lined up to buy Shop-Vacs at 40 cents on the dollar, and the company sold $160,000 in vacuums and filter bags in two days.

"I wanted to say thank you to the community and make sure the community knew we were back in business, and we're here to stay," said Lawrence. Employees told Lawrence the previous managers would never have conducted a similar event. "It's part of building the culture, giving to the community," he said.

A former employee at Shop-Vac sued the previous owners of the company in federal court in June, alleging that Shop-Vac Corp. violated the Worker Adjustment and Retraining Notification Act by laying off workers without the required 60-day notice. But the current owner, Shop-Vac USA LLC, is not a party to the lawsuit.

Gary DuBoff, the chief executive of GreatStar Tools USA, said his company saw the Shop-Vac acquisition as a rare opportunity to acquire a brand so well-known that its name is synonymous with all wet-dry vacs. Though many people doubted him, Duboff said GreatStar never considered dismantling the company.

"Once they found out who GreatStar was, I don't think anybody believed that this thing wasn't going to close down and move to China and that would be the end of it," said DuBoff. "But that was never our plan. We all along wanted to make this more or less a U.S. manufacturing base and to try and bring it back to its former glory."

DuBoff, who grew up in Northeast Philadelphia and got a communications degree from Penn State, said he encountered similar concerns four years ago when GreatStar acquired Arrow Fastener in Saddle Brook, N.J., where he was president.

At the time, GreatStar told him it only wanted to buy the company if the management team, the employees, and the plant were part of the deal. Under Chinese ownership, he said, nothing really changed in the way Arrow Fastener operated.

"Basically they said to me, 'We are not as familiar with operating a business in the United States as we are outside, so we are relying on the team's expertise to continue to run this business successfully,'" said DuBoff. "And to their credit, they have absolutely adhered to that. We do not have culture clashes because they don't really operate the day-to-day business."

GreatStar Tools USA is owned by Hangzhou GreatStar Industrial Co. Ltd., which describes itself as a leading manufacturer of hand tools in Asia serving markets worldwide. It was founded in 1993 by Qiu Jianping, 59, an entrepreneur who has a master's degree in engineering. Qiu also controls Hangcha Group, one of China's largest suppliers of forklift trucks and parts.

About $974 million, or 71%, of Hangzhou GreatStar's $1.4 billion in 2020 sales were made in the United States, according to the company's annual report. Though its shares are traded on the Chinese stock exchange, Qiu and his family own a controlling interest. Qui is listed as a multibillionaire by Forbes.

GreatStar seems to be following what it called a "glocal" approach to the U.S. market, in which the parent company takes a global role for strategy and direction but leaves operational decision-making to local managers, said Charles J. Skuba, professor of the practice at Georgetown University's McDonough School of Business.

"They seem to be bent on this local management approach to the U.S. market, which seems to be pretty smart," said Skuba.

But Skuba also cautioned that the early stages of foreign direct investment "are always the stage of big promises" and that the hand-tool industry does not have huge growth prospects. There likely will be some consolidation and reductions at Shop-Vac as GreatStar optimizes costs among its various operating units.

Lawrence acknowledges that Shop-Vac is unlikely to employ the 400 people who worked in Williamsport before last year, nor the 1,700 employees worldwide before it closed. GreatStar Tools USA will take over some of the marketing and distribution — it maintains sales offices near the headquarters of major retailers like Lowe's, Home Depot, and Walmart to service its big retail customers.

And Shop-Vac will consolidate operations in Williamsport from three buildings to two, and is looking to sell surplus vacant properties it owns in Canton, Pa., and in Binghamton, N.Y., where the previous owners manufactured motors for its vacuums before relocating that business to Asia several years ago.

Lawrence said Shop-Vac will continue to produce motor assemblies for all of its vacuums in Asia, and it will also continue to produce small Shop-Vacs — under four gallons — in China or in Vietnam to reduce tariff costs. Those smaller household vacuums sell at a lower profit margin, and they can still be produced in Asia at a lower cost.

The alternatives could be worse, according to Skuba, the Georgetown business expert:

"It's much better to be acquired by somebody who wants to expand in the marketplace," he said, "than by somebody who's going to strip you of your assets and reduce overhead."