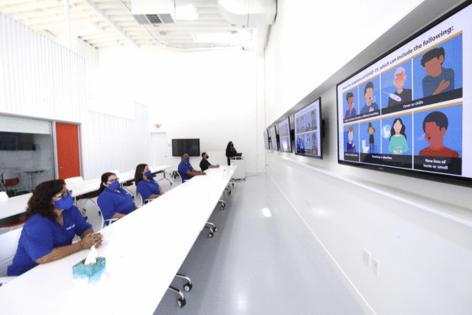 Payroll jobs in the state grew by 104,300 in August to a total of 16.63 million, accounting for 44% of U.S. job growth, officials reported. The nation's employment recovery was unexpectedly slow last month as vaccination rates in many states lagged that in California.

As of this week, two-thirds of California's population had received at least one virus inoculation. Nonetheless, with COVID-19's Delta variant continuing to spread and vaccine resistance persisting, economists said the state's recovery may remain uneven.

"California's economy is now coping with larger concerns about the Delta variant than in the second week of August when the jobs data was collected,"said Lynn Reaser, an economist with San Diego's Point Loma Nazarene University. "The impact of school reopenings on infection rates and a weakening in consumer confidence could weigh on the near-term economic outlook."

By last month, the Golden State had recovered just 62% of the 2.7 million jobs it lost in March and April 2020 when the pandemic took hold.

In California, "another full-scale economic shutdown is highly unlikely, but future economic growth could slow as long as the new virus remains a serious concern," said Sung Won Sohn, a Loyola Marymount University economist. "The cloud cover has not gone away."

Public schools accounted for 46,900 jobs or nearly 45% of California's net employment growth last month. "That's likely a one-off gain that won't be repeated," said Scott Anderson, an economist with the Bank of the West in San Francisco.

Apart from leisure and hospitality companies, which added 33,100 positions, he said, hiring in other sectors was "quite anemic. Supply chain bottlenecks, port backlogs and COVID fears are increasingly weighing on the California economic outlook."

Business travel and tourism, linchpins of California's economy, dried up beginning in March of last year. But this year, domestic leisure travel picked up, sports venues reopened and jobs began to return.