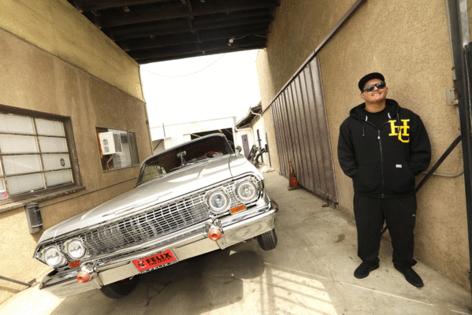 It's not your imagination. That driver at the stoplight is revving his engine so loudly it can set off car alarms. Then he roars off as the signal turns green, even if it's just to the next stoplight.

Like some sort of pandemic-inspired primal scream, this flooring-the-pedal thing is happening all over. That's because a global semiconductor shortage is making new cars scarce, and low inventory is making used cars expensive, so people with time and money are sinking them into their older rides — and some are making them as fast and loud as possible.

Sales of parts to make vehicles faster, flashier and sometimes much noisier were a major contributor to the record $47.9 billion 2020 sales year for California's aftermarket automotive industry, the largest of its kind in the U.S., according to data from the Specialty Equipment Market Association.

For enthusiasts, spending money on their dream projects has represented a psychological refuge from the pandemic's isolation and uncertainty, SEMA Vice President Mike Spagnola said.

"While people couldn't travel, while they couldn't spend money in hotels and on food, because they couldn't get out and do concerts and all those sorts of things, men and women put some time and effort into their cars and trucks," he said.

Jonathan Rodriguez was looking for something to break up the pandemic's isolation and monotony.

The 20-year-old Long Beach resident found it in a 1963 Chevy Impala Super Sport lowrider, which can be heard and felt before it comes into view, courtesy of a 400-horsepower, 6.0-liter General Motors LS2 V-8 Corvette engine. Mindful of the car's ability to roar, Rodriguez said he's careful to drive sedately in residential neighborhoods so that he doesn't disturb people.

"I was like, 'Man, I don't know when this lockdown is going to be over,' but it's giving us extra time to get our rides to where we want them to be," Rodriguez said. "I got a lot of things done that I wouldn't have probably gotten done if it wasn't for the lockdown."

Rodriguez re-chromed the car's bumpers, installed a new sound system, new headlights, a new drive shaft, new suspension coils and made improvements to the hydraulics that lift the car to various heights and angles that, to a novice, just wouldn't seem possible.

Much of the work was done around the corner from the family home at Speedy's Metal Finishing, under the tutelage of his father, Luis "Speedy" Rodriguez, a legend among California aftermarket businesses that cater to lowriders. As restrictions eased, the car was further burnished by a variety of other specialists around Southern California.