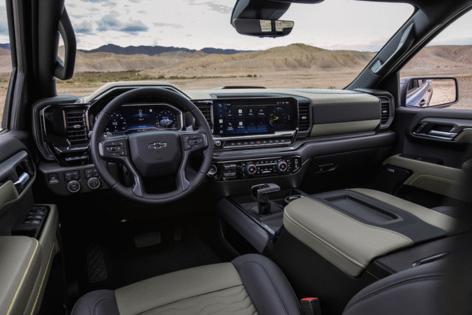 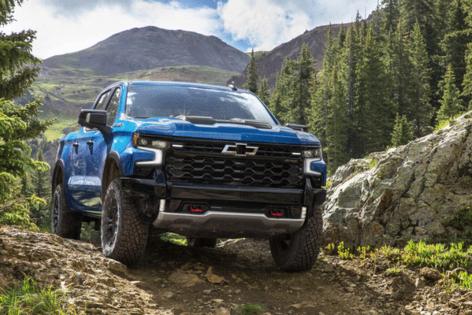 The Silverado remake is complete.

The launch of Chevy's fourth-generation, 2019 full-size pickup set segment benchmarks for chassis light-weighting and rugged bed construction. But the sleek truck was dogged by questions about the uninspired interior and lack of a performance truck model. With the 2022 Silverado, the bow-tie brand has filled in the holes with a state-of-the-art, digital interior and flagship, terrain-gulping ZR2 warrior.

Due in spring of next year, the Chevy Silverado ZR2 will go head-to-head against Ram and Ford competitors with a standard (on LT models and up), 12.3-inch digital instrument display and Tesla Model 3-like, 13.4-inch horizontal console screen.

With Formula One-inspired Multimatic shocks, twin-locking e-differentials, and two-speed transfer case, ZR2 will draw comparisons to the Ram 1500 Rebel and Ford F-150 Tremor and Raptor — though Chevy resisted going after the Ram TRX and Ford Raptor R super trucks by equipping its mule with a supercharged, 700-plus horsepower mill. ZR2 is motivated by Chevy's familiar 420-horsepower, 460-torque. 6.2-liter V-8.

The flagship, off-road ZR2 — like the Corvette sportscar for on-track enthusiasts — is a showpiece for Chevrolet technology and performance.

Lifted over 11-inches off the ground on huge, 33-inch off-road tires, the ZR2 — in stock form — has been flame-tested in the brutal Best in Desert racing series. Its sophisticated Multimatic shocks are race-proven to go up against similar performance variants like Fox (Raptor, Tremor) and Bilstein (Rebel).

The black front grille and hood menaces, underbody skid plates protect against hard hits, and the V8 is a monster. But there is beauty inside the beast.

"We applied what we learned in racing and Moab testing to the new ZR2, but (it) doesn't beat you up on the highway with its ride quality. It's equally capable and comfortable," said Dom Lester, GM chief engineer of Performance Variants.