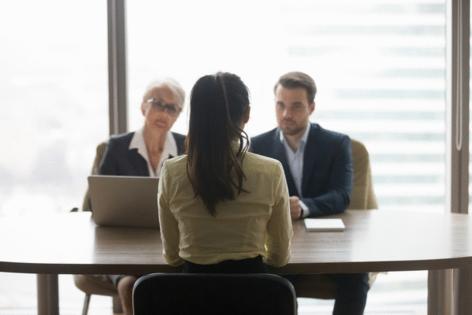 By one estimate, over a 40-year career the persistent lower pay for women translates to a lifetime earnings penalty of $500,000 less than what men earn (for white women) to more than $940,000 less (for Black women) and $1.1 million less (for Hispanic and Latino women).

Among the causes: gender wage bias by employers; the unequal division of household work that causes many women to take time off to care for family; and a disinclination at times among women to forcefully negotiate pay, especially since such assertiveness at times leads to a backlash.

Now, another cause has surfaced. New research finds female undergrads rush to nail down their first job faster than men, and in doing so may miss better offers.

Academics studied job-hunting habits and initial salary offers for more than 1,300 undergrads at the Questrom School of Business at Boston University between 2013 and 2019.

There was no gender difference in the number of job offers, nor the tendency to turn down a job offer. But female students were more inclined to accept a job earlier than male classmates, by an average of one month.

Among those accepting offers during the summer (August) heading into their last year of school, women earned 17% less than men, on average. By graduation, the wage gap had narrowed to 10%. (The data takes into account different majors — marketing vs. finance — and GPAs.)

Granted, that 10% gap is still problematic — it worked out to an average gap of around $6,000 — but the research suggests that being a bit more patient can pay off.

Why the difference between genders in timing?

Creative Artists Agency on Friday sued its insurer Affiliated FM Insurance Co. for not covering losses suffered due to the COVID-19 pandemic.

As the pandemic raged throughout 2020, poverty declined in the United States thanks to infusions of federal money, according to a report released Tuesday by the U.S. Census Bureau.

According to the so-called Supplemental ...Read More

WASHINGTON — Executives at Toyota Motor Corp. are urging members of Congress to reject a proposal that would expand tax credits for electric vehicles up to $12,500 and offer significant incentives to buy union-made cars....Read More

One in four American parents who borrowed from the federal government to help pay for a child's college education don't expect to retire as planned because of the debt, a survey to be released Tuesday says.

Aside from the air travel downturn, the aerospace giant is currently unable to deliver the 787 ...Read More