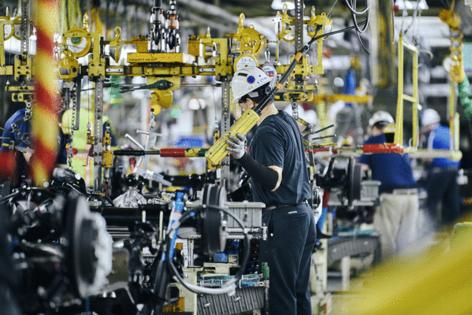 WASHINGTON — Executives at Toyota Motor Corp. are urging members of Congress to reject a proposal that would expand tax credits for electric vehicles up to $12,500 and offer significant incentives to buy union-made cars.

The legislation, proposed by Rep. Dan Kildee, D-Mich., would lift the manufacturer cap on EV credits and implement $7,500 point-of-sale consumer rebates for electric vehicles. It would pay out an additional $4,500 for vehicles assembled in a union facility and another $500 for vehicles using a battery manufactured in the U.S.

"The current Ways and Means Committee draft makes the objective of accelerating the deployment of electrified vehicles secondary by discriminating against American autoworkers based on their choice not to unionize," Toyota wrote Monday in a letter to leaders of the House Ways and Means Committee, which plans to vote this week on whether to include the bill in Democrats' $3.5 trillion social spending bill.

"This is unfair, it is wrong, and we ask you to reject this blatantly biased proposal."

Toyota assembly plants are not unionized, and many are located in southern states where unionization is less common.

Toyota executives from Indiana, Texas, Missouri, Kentucky, Alabama, California, Mississippi, Tennessee, Michigan and West Virginia argued in the letter that whether an EV is made by union workers is irrelevant to the administration's climate goals and that pay for workers in Toyota's nonunion facilities is competitive with union wages.

"Our common goal is straightforward: reduce the amount of carbon that autos release into the atmosphere by putting more electric vehicles (EVs) on the road," the company wrote.

"While the EV tax proposal before you makes strides toward that goal, it includes provisions that will discriminate against nearly half the autoworkers in the country and puts the environment second to unrelated agendas."

Honda Motor Co., which also does not have unionized production workers, said in a statement Monday that Congress should "treat all EVs made by U.S. auto workers fairly and equally" if they intend to fight climate change. Tesla Inc., which also is nonunion, has criticized the legislation too.