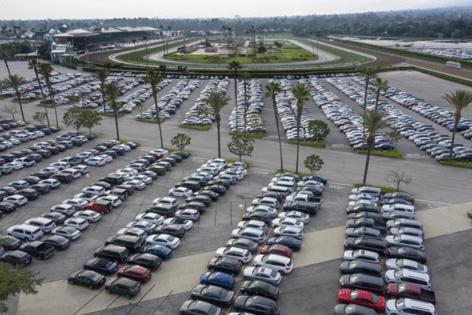 On a trip to visit Disneyland with his children, John Jimenez of San Jose, Calif., reserved a compact car from Dollar Rent a Car at Los Angeles International Airport. What he got when he landed was a headache.

Due to a vehicle shortage, the car rental agency offered him a van that he said reeked of cigarettes and marijuana instead of a compact car. Jimenez refused the malodorous van, and after a more than two-hour wait he settled for another van with more than 60,000 miles, visible body damage and a "musty odor" that seemed to come from the air conditioning system.

"The area where the compact cars were was empty," he said, adding that he has demanded a full refund.

A global microchip shortage that has cut production of new cars continues to deal a heavy blow to car rental companies, but most of the pain is being felt by travelers such as Jimenez who find themselves waiting in long lines, paying nearly double the rates of earlier this year, getting denied the vehicle they reserved or ending up driving away in a car with lots of extra wear and tear.

The bad news is that the car shortage — and the headaches for car renters — won't ease until 2022 or later, according to car rental industry experts.

Because of the shortage, car rental companies are keeping their cars longer before selling them and replacing them with new vehicles. In the past, rental firms sold their cars when they reached 25,000 to 50,000 miles, but they are now keeping them until they reach nearly 90,000 miles, Scott and other industry experts said. Rental companies are also trying to restock their aging fleet by buying back cars that had been previously sold off at auction to used-car dealerships.

As a result, car rental prices jumped to an average high of $120 a day this summer, compared with about $45 at the beginning of the year, according to a study by the travel booking site Hopper.com. Prices have since dropped to about $80 a day and continue to trend downward as demand declines with the end of the summer travel season, the study found.

But prices are expected to climb again as travel picks up during the upcoming holiday season, said Steve Sintra, vice president and general manager of North America at the travel website Kayak.com.