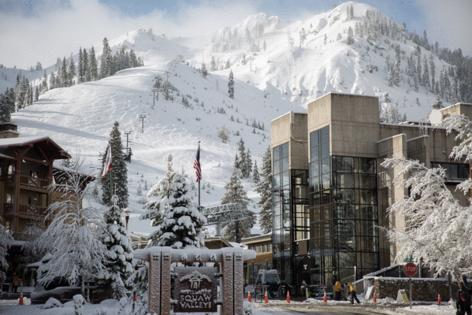 The historic Squaw Valley ski resort near Lake Tahoe will be renamed Palisades Tahoe after its owners determined that the term "squaw" was offensive to Indigenous woman.

"This name change reflects who we are as a ski resort and community," said Dee Byrne, president and chief operating officer of the resort. "We have a reputation for being progressive and boundary-breaking when it comes to feats of skiing and snowboarding. We have proven that those values go beyond the snow for us."

The new name — meaning steep, high cliffs — is a reference to the sheer granite faces and chutes around the resort. The new logo resembles an eagle above two mountain peaks. The name will represent both the current Squaw Valley and Alpine Meadows ski resorts in Northern California.

The name change comes about a year after the Washington NFL franchise dropped its "Redskins" moniker and Indian head logo following decades of criticism that they are offensive to Native Americans. FedEx, Nike, Pepsi and Bank of America all spoke out against the previous name, which the franchise adopted in 1933 when the team was based in Boston. The franchise is expected to announce its new name in 2022.

Only two months ago, the Cleveland Major League Baseball team that has been called the "Indians" since 1915 announced it will change its name to Guardians, also responding to an ongoing national dialogue about logos and names that many consider racist.

Elsewhere in Northern California, the state has proposed changing the name of Patrick's Point State Park in Humboldt County to Sue-meg State Park, drawing on the original name given to the area by the Yurok people. The current name is in reference to Patrick Beegan, a homesteader who was accused of murdering Native Americans in the 1850s. The Yurok tribe requested the name change, according to the state.

The name change would be the first for a California park under a state effort to examine contested place names, called the Reexamining Our Past Initiative. The name change will be considered by the California State Park and Recreation Commission at its meeting Sept. 30.

Resort operators say the decision to ditch "Squaw Valley" came after an "in-depth research and discovery process" into the history of the region and the Washoe Tribe who called the Olympic Valley home, as well as several surveys and focus groups among locals, employees, skiers and members of the Washoe tribe, according to resort officials.

The research concluded that the word "squaw" is considered a racist and sexist slur against Indigenous women, according to the resort.

The Washoe Tribe of Nevada and California released a statement Monday, commending the name change, calling it a "milestone decision."

"Over time, the word 'squaw' came to be used as a derogatory and racist term against Native American women," the tribe said. "Native American communities across the country have been working for years to have this term removed from place names in their ancestral lands."

Linguists and other experts on Native American languages describe "squaw" as a disparaging word for "woman" or "wife."

"We were compelled to change the name because it's the right thing to do, especially for the generations yet to come, who will grow up without having to use a slur to identify the place where they chase their dreams down the mountain," said Ron Cohen, former president and chief operating officer of Palisades Tahoe.

Squaw Valley, which opened in 1949, and nearby Alpine Meadows combined in 2011 under the parent company KSL Capital Partners and the management company Squaw Valley Ski Holdings.

The resort, which hosted the Winter Olympics in 1960, has also been known as Olympic Valley.

WASHINGTON — Despite a still-menacing pandemic and a cascade of other domestic and international threats to the U.S. economy, Federal Reserve policymakers on Wednesday expressed confidence in the recovery and said they ...Read More

Negotiations have broken down between the International Alliance of Theatrical and Stage Employees (IATSE), which ...Read More

Passenger satisfaction at America’s airports is starting to dip from all-time highs as airports get busier, with O’Hare International Airport ranking last and Midway Airport in the bottom half, according to a study ...Read More