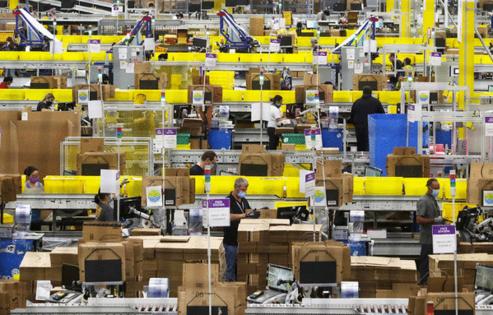 But for the first time in a year, there's an inkling that the company's record-setting pace of growth may be slowing ever so slightly, sending Amazon shares down in after-hours trading. Shares opened Friday morning down almost 7%.

By any standard but the outsize performance of the pandemic, Amazon had a standout quarter. The company reported Thursday earnings of $7.8 billion, a 48.4% increase from the same period last year, and $15.12 in earnings per share. The figure blew past analysts' expectations of $12.22 per share.

Amazon charted its third consecutive quarter of $100-billion-plus sales, recording $113.1 billion in revenue in the three months from April to June for a 27% increase over the same period last year. That was in line with the company's forecasts, but slightly lower than analysts' expectations of $115 billion. In the preceding year, Amazon revenues grew roughly 40% per quarter, on average.

The retail giant was always going to struggle to show up last year's blockbuster results. As shoppers stuck indoors by the pandemic embraced online ordering, Amazon earnings doubled nearly every quarter in the past year, compared to the same periods a year earlier. In the January-to-March quarter, they .

Still, Amazon's immensely profitable second-quarter results indicate that even as some consumers return to pre-pandemic shopping habits, many continue to buy online — and specifically, on Amazon.

An end to COVID restrictions "does tend to lead [customers] to do other things besides shop," Olsavsky said. Despite rising number of COVID-19 cases, largely caused by the delta variant of the coronavirus, and new federal and state guidance advocating a return to mask-wearing indoors, the company does not expect new restrictions on in-person business in the U.S. and Europe, he added.

Thursday's earnings release was the first for the company's new CEO, Andy Jassy, formerly the head of Amazon Web Services. The results aren't a referendum on Jassy's performance in the top seat — Jassy replaced Amazon founder Jeff Bezos on July 5, after last quarter's books had closed.