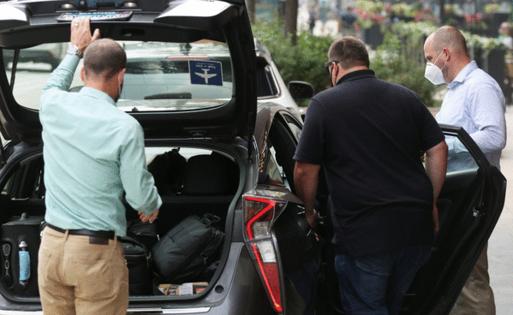 Ride-share users paid an average of $26.43 per trip in June, Chicago city data shows — the highest monthly average since the city began tracking data in November 2018, and nearly $10 more than the same month in 2019.

The increase meant the average ride-share trip in June cost a little more than the average trip by taxi, which is regulated by the city. That was a reversal from two years earlier when passengers paid nearly $2 more to travel by cab.

The uptick in ride-share prices was enough to convince Mike Morgan and his wife, Elena, to rely on the “L to get around the city on a recent trip from California, though it sometimes meant waking up earlier. But midmorning one weekday they were running late, and took a ride-share the roughly 1 mile from their hotel to Navy Pier. The cost: $15.

“It’s getting to the point of where that’s not the first option now,” Morgan said.

Uber and Lyft say the high prices are due to a supply and demand problem. Riders are ready to go out, but not enough drivers have returned to the road. As drivers return, prices will go down, they said.

But it might be more complicated, said P.S. Sriraj, director of the Urban Transportation Center at the University of Illinois Chicago.

Prices will likely be tied to how quickly workers are called back to their offices, and to how comfortable travelers feel taking public transit instead of ride-shares. The return of shared rides, which were largely halted during the pandemic and returned on Lyft’s platform July 15, is likely to factor into the price, he said. Shared rides allow passengers going the same way to ride together and split the cost.

The increase in prices could also be part of the companies’ long-term plans to be profitable, he said.