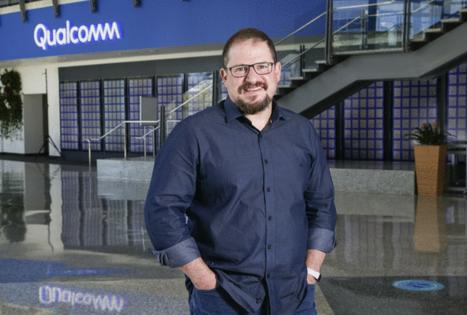 The San Diego wireless technology giant on Wednesday said its quarterly sales rose 65 percent from a year ago to $8.1 billion. Adjusted net income jumped 130 percent to $2.2 billion, or $1.92 per share.

That beat Wall Street analysts’ average estimate calling for adjusted earnings of $1.67 per share on revenue of $7.55 billion.

“The need for our technologies and products has never been more evident,” said Chief Executive Cristiano Amon, who officially took the helm in June. “We are seeing demand across virtually every industry because our products and technologies are essential ingredients that enable digital transformation in the cloud economy.”

While selling processors used in smartphones make up the bulk of the company’s revenue, Qualcomm has been working for years to diversify its customer base beyond smartphone makers.

That effort has gained momentum. The company said sales in the quarter to Internet of Things customers making laptops, headphones, virtual reality gear, asset trackers and myriad other non-smartphone devices, rose 82 percent from the year-ago period to $1.4 billion.

Amon said full-year sales of Internet of Things, automotive and radio frequency front-end products are expected to grow from $6 billion last year to $10 billion this year.

The pipeline continues to grow. In automotive, Qualcomm’s backlog of orders has reached $10 billion, with an annual revenue run rate of sales to car makers of $1 billion as of the June quarter.

In smartphones, Qualcomm is benefiting on a couple of fronts. It is once again supplying cellular modem processors to Apple, which reported Tuesday that iPhone sales nearly doubled to $39 billion in the June quarter compared with a year ago.

Asked about Apple’s efforts to design its own cellular modem to ditch Qualcomm as a supplier, which is a key concern for investors, Amon noted that Qualcomm has a multi-year supply agreement with Apple that is just in its initial year.